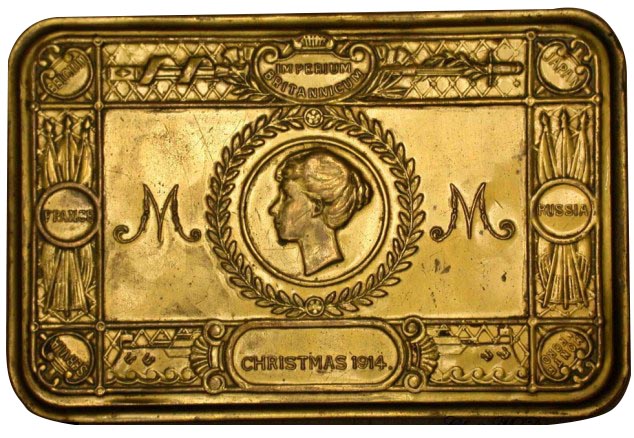 1914. The date, printed on a tin box got our attention. One supposes it could be an error of some sort, the date being one-hundred years in the future, but given the odd goings on at Vauxhall last week and at the Marquess of Dansbury’s estate—blue lights and claims of travel to distant times—your Teatime Tattler staff believes the date is correct. Besides, it purports to hold tobacco from “Princess Mary’s Christmas Fund,” and who, pray tell, is Princess Mary?

What was inside, once we pried it open, however, was not tobacco. A folded sheet of paper, oddly yellowed, lay in it. When unfolded (carefully so as not to damage the brittle pages) the text turned out to be in French. Luckily, the Tattler staff was up to the task of translating.

Dear Aunt Lumina,
The family sends greetings of the holy season along with our hope that those of you in Marseilles, far from the pounding of the guns, fare well and have plenty to eat.

We eke by here in Picardy, with fighting all around. In spite of it all the Christmas market went on in front of the Cathedral as it has in the past. If the booths held fewer goods, the cheer made up for it. The people of the city hold on to hope and (with a few exceptions) good morale.

I regret to tell you that one exception is your niece by marriage Sabine Legrand. Even you must know she has ever been a bitter woman and the war has not softened her. I often thought the Good Lord chose to withhold the blessing of motherhood from her lest she inflict her misery on a child. Her jealousy of her poor sister in law Rosemarie—obvious for years—became a river of bile after the birth of little Marcel.

As you know Raoul Legrand died at the hands of the Germans last year, leaving Rosemarie in poverty and at the mercy of his sister. She was forced to move to her father’s cabin in the Floating Islands. Sabine would have us believe that that Rosemarie collaborated with German soldiers, selling her body for food and money. I could almost forgive a mother desperate to feed her son for doing something of that sort, but I find it difficult to believe Sabine. Bernard says Raoul made similar accusations in the taverns during his last leave. He told anyone who would listen that the German boy found dead among the Islands was Rosemarie’s lover. I don’t know what to believe. 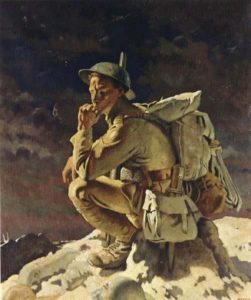 Since the Christmas Market Sabine has taken up a different story. We all saw Rosemarie and Marcel walking about with a Canadian soldier who bought sweet cakes for the boy and his mother. Rosemarie certainly couldn’t afford them herself. Sabine tries to make this something dirty and scandalous. I refuse to listen to her.

The British, Canadian, and Australian troops stationed along the Somme have been kind in our dealings with them. One of them gave my Papa the enclosed box still half full of tobacco after commandeering use of his farm wagon to haul supplies. Papa as you know does not use tobacco. He asked me to send it on to Uncle Herbert.

Pray for us in Picardy, particularly for poor mothers such as Rosemarie Legrand struggling to survive long enough to see this war end. I hope she finds joy with her Canadian soldier, if only to spite Sabine. She deserves a crumb of happiness.

My love to the rest of the family,
Josephine

We at the Tattler hope so too.

About Never Too Late

Eight authors and eight different takes on four dramatic elements selected by our readers—an older heroine, a wise man, a Bible, and a compromising situation that isn’t. Set in a variety of locations around the world over eight centuries, welcome to the romance of the Bluestocking Belles’ 2017 Holiday and More Anthology.
It’s Never Too Late to find love! 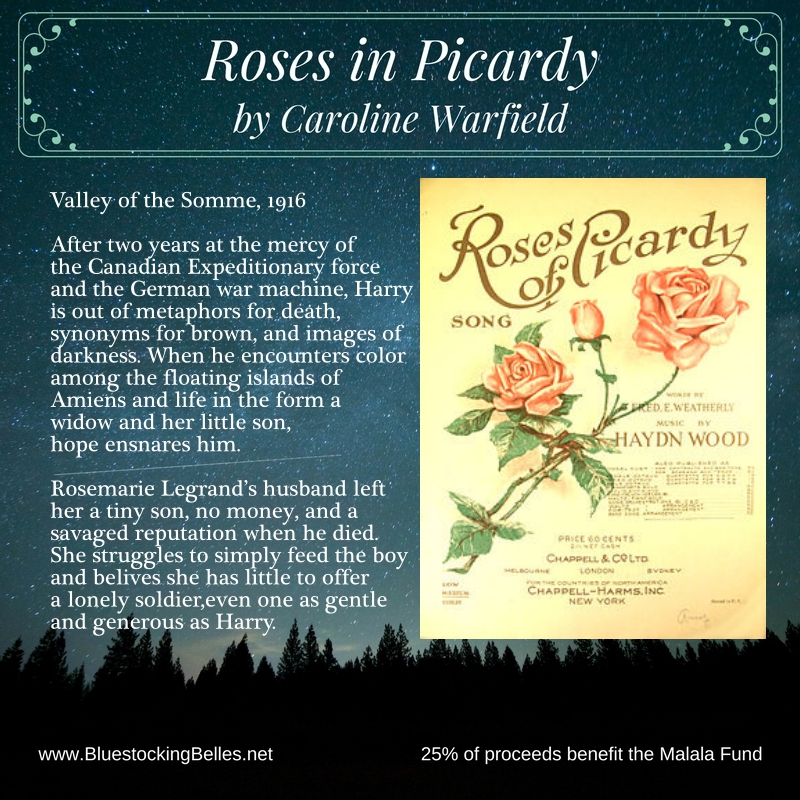 Caroline Warfield has been many things. Now retired to the urban wilds of Eastern Pennsylvania, she divides her time between writing and seeking adventures with her grandbuddy and the prince among men she married. Her new series sends the children of the heroes of her earlier books to seek their own happiness in the far-flung corners of the British Empire