A Bluestocking Belles with Friends Collection

So start their adventures in York, amid a whirl of balls, lectures, and alfresco picnics. Is it possible each of them might find love by the time the York horse races bring the Season to a close?

To see our current giveaway to support the launch of Desperate Daughters, click here.

Read on for blurbs 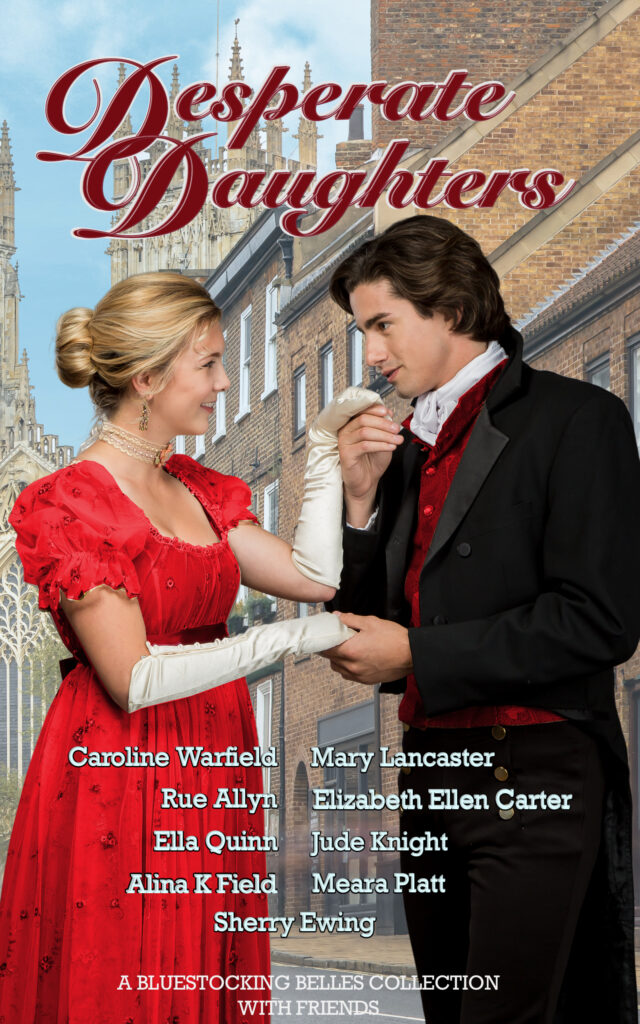 Read on for story and author details

Employed at a hotel, Lady Dorothea Bigglesworth had no use for a title. It would only invite scorn, or, worse, pity. Plain Miss Doro Bigglesworth suited her fine. Ben Clarke dedicated his life to helping the neediest. It gave his life meaning. He tended to forget the younger son of a viscount went by “Honorable.” Neither saw the need to mention it to the other, until they were formally introduced— in a ballroom in York. Shocked.

At the age of 27, Lady Barbara has long accepted her position on the shelf. She is thrilled to put aside her music-teaching in order to help her beautiful young sisters find eligible husbands. But then, a chance encounter with an unconventional and mysterious young piano tuner has her heart in a spin. Can she trust him? And can she save him from the lethal threat hanging over them both?

The Butler and the Bluestocking: By Rue Allyn

On arriving in York to visit his godmother, the honorable Malcolm K. Marr did not expect to find her house locked and empty. Nor did he expect to have to break in to the house to find shelter. Least of all did he expect to be awakened at mid-day after the break in to find a woman with the bearing of an Egyptian goddess demanding to know what he was doing in her house.

Fate has given twins Ivy and Iris Bigglesworth a season in York. They vow to marry only brothers so the sisters will never be apart. But what are the odds of finding and falling in love with two eligible brothers? Hearts race when they meet two handsome cousins who are betting their future on a risky racing venture. Soon the twins learn there are more than fortunes to be lost on a four-to-one fancy.

I’ll Always Be Yours: By Ella Quinn

All her life Miss Harriett Staunton believed she was the natural daughter of an earl. In the merchant society in which she was raised, that only garnered improper proposals. Knowing she would never wed, she moved to York, far away from her London family.
Lord Sextus Trevor needs to wed. Unbeknownst to him his father has arranged a marriage. But before he is even told about the betrothal, he’s whisked off to York, where he meets Harriett Staunton and must find a way to defy his father.

Dom Finchley only came to York as a favor to his half-brother, who asked him to attend a meeting there. After a devastating break with the Finchley family followed by ten years at war, he is keen to get the favor done and then leave to build the home he’s never had. A place to call his own.

Then he meets Chloe.

Chloe Tavistock is past the age for the marriage market, and unfashionable in her shape, her opinions, and her enthusiasms. She is not going to find a husband in York, whatever her fond brother might think.

And then she meets Dom.

Two people who have never fitted in just might be a perfect fit.

After years of putting up with her late husband’s rowdy friends, Honoria, Lady Twisden has escaped to York where she can paint, investigate antiquities, and enjoy freedom. Then her stepson appears with a long-lost relation in tow. Promised York’s marriage mart and the hospitality of his cousin’s doddering stepmother, Major August Kellborn is shocked to find that his fetching hostess is the one woman who stirs his heart.

A Duke For Josefina: By Meara Platt

Lady Josefina would much rather spend her time studying plants and their healing properties, but her father, the Earl of Seahaven, has died and left the family impoverished. Marriage seems her only alternative until she meets the handsome Duke of Bourne in an apothecary in York’s ancient Shambles. He offers her an intriguing proposition, a fake betrothal and a king’s ransom as reward if she returns with him to his estate and finds a cure for his sister’s illness. But will the true reward be his heart?

A Countess to Remember: By Sherry Ewing

Sometimes love finds you when you least expect it…

Patience, the young Dowager Countess of Seahaven cares for a bevy of stepdaughters, and a Season for each to find husbands seems out of reach. There’s been no chance for romance herself but fate intervenes in the form of Richard, Viscount Cranfield, in York for his sister’s Season. Will Patience allow herself time for love?