Out troops continue to make a good showing, chasing forces of the little Corsican back where they belong. It will not, one thinks, be long now. While many have given with blood and treasure to bring glory to England, we have reported before that fail their duty. This paper has never failed to report such dereliction when it comes our attention and to bring public shame on them miscreants. I draw the reader’s attention to recent examples.

—One Lt. D lured a certain Miss W., who had been hired as nursemaid to officers’ families safely billeted in Lisbon, from her post one evening. The young lady did not return and is reputed to followed the Lieutenant in the train of camp followers when troops moved north, her disgrace at his hands now permanent.

—The well known episode of an entire company of men who deserted their post when rumors of a liberated wine seller came to light, failed to appear on time to face the frogs at Roncesvalles does not bear repeating. A description of their punishment would not be fit for ladies’ eyes.

—Captain L., officer though he may have been, was shot for desertion, having fled the field and hid in the hills during action in the Pyrenees.

Sometimes, dear reader, we wrongly report. Rarely does this happen. When it does we make it right. Loyal readers may recall that we had reports, well verified reports, that a certain Major M., seen at the siege of San Sebastian, disappeared from his post and was rumored to have been discovered malingering in an inn along to the coast, probably in a drunken stupor. 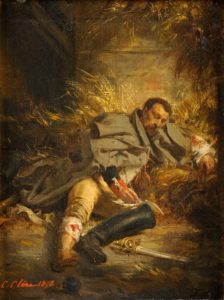 It pleases us to correct the error. We have been reliably informed that the gentleman is in fact recovering from wounds received at the hands of the vile French, and we are able to publish the name of this heroic soldier. Maj. Andrew Mallet left San Sebastian during the siege on a mission whose purpose is shrouded in mystery. Our source indicates that he is believed to have been captured and questioned by the French in a —here we beg the indulgence of our more gentle readers—“hell-hole.” His release was obtained through the heroic efforts of those soldiers closest to him and, it must be said, the expenditure of considerable amount in gold supplied by the Marquess of Glenaire, that fixture of Horse Guards, himself.

We have been unable to uncover any specifics about the mission that led to his capture, but rumors abound that the Marble Marquess himself may have ordered it. The presence of his private yacht off the coast during the daring raid to rescue Mallet gives credence to the rumor. If he was indeed responsible, his rescue efforts are to be applauded.

Servants have told our informant that the major suffered wounds “in every part of his body,” surely an exaggeration. They are adamant to a man that his head and face are swathed in bloody bandages, however, and one man swears he saw saber slashes across his chest when he delivered more linen.

Of the Marquess, we have no word. If he is present at the inn as rumors imply, he has either bribed or intimidated all witnesses into silence. One can only conclude he regrets his part in this horrific episode and does not wish his name bandied about.

Major Lord James Heyworth, hard riding cavalry officer and well-known rakehell, has been seen visiting the bedside, It appears the three of them have been friends since Harrow, along with the Earl of Chadbourn who returned from the Peninsula to take up his responsibilities upon the death of his father last hear. School ties run deep.

We await the start of the spring campaign and hope for an end to the madness caused by the French emperor.

Dangerous Works
Andrew Mallet recovered from those wounds and returned, badly scarred, to service, only to suffer even greater injuries at Waterloo. The war over, he sold out and went home to Cambridge, seeking healing for his wounds and peace for his soul. His only desire was work that would have made his father, a classics scholar, proud. A determined woman had other ideas. What happened? You can read his story in Dangerous Works.

As to the others, the Marble Marquess meets his match in Dangerous Weakness, Jamie Heyworth confronts his demons in Dangerous Secrets, and the Earl of Chadbourn finds a partner he can lean on n A Dangerous Nativity.

For more about their stories see: 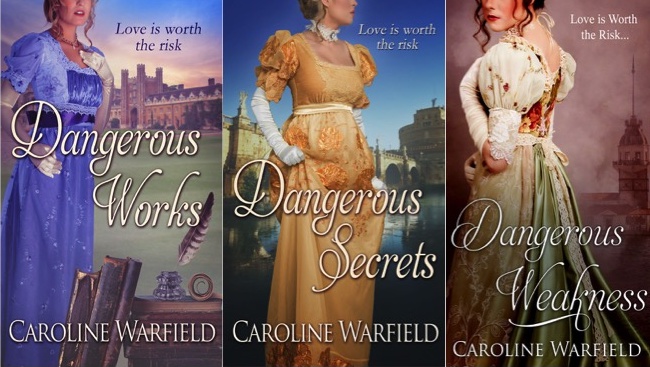 The Duke of Danby is at it again!

Fashions through the 19th Century