What Happens at The Soho Club?

Rumours abound regarding The Soho Club, an establishment so discreet that many members of the ton are unaware its doorways adjoin their own. All we know, dear reader, is that The Soho Club’s membership is expensive, exclusive — and scandalous. 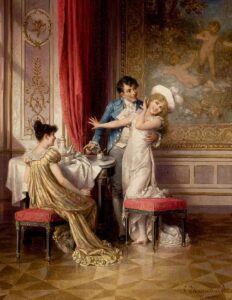 In what manner scandalous, I hear you ask? To begin, both men and women attend the premises. To go on, it’s said this club offers a place where one’s most daring appetites are expected, and certainly encouraged.

The proprietress is rumoured to be a Mrs Skarsgard, about whom no one knows a thing except that she is wealthy, lovely, and of indeterminate age and status. She’s surely a natural-born cousin of a countess, or the like.

There’s only rule at her Soho Club – discretion above all things. What happens in the Soho Club, stays in the Soho Club. It’s only in this atmosphere of secrecy that our Regency lovers are free to indulge themselves in the pursuit of pleasure, desire, and of course, romance. For those who yearn to love outside imposed boundaries, love is always possible.

About the Collection:  Ten tempting Regency romance novellas to tickle your tastebuds, ranging from sweet to spicy 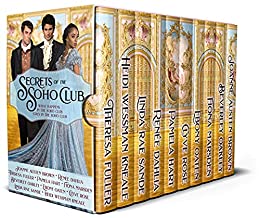 Theresa Fuller, A Headhunter in London:
A curious journalist is on to the story of a lifetime. But is this scoop worth putting her life – and her heart – on the line?

Heidi Wessman Kneale, Just Glimpse
A shy artist needs real experience when it comes to the human form. But how is she to find a willing model without causing scandal?

Beverley Oakley, Hazard’s Daughter
Louisa Stapleton’s life of drudgery is penance for past ‘sins’. A marriage proposal from the unctuous Mr Rivers could seal her fate. The object of her true affections is Felix Evesham, but Felix is distracted by the mysterious (and masked) ‘Miss Valentine’ at The Soho Club.

Renée Dahlia, Love Wasn’t Built in a Day
Businessman Humphrey Dexington’s love for engineer David Mattson will be forever unrequited. Humphrey invites David and his lover to the Soho Club for an evening together, but when David’s lover doesn’t show, it might just give Humphrey the chance he’s always wanted.

Pamela Hart, A Generous Heart
Accessing her own substantial inheritance from conservative trustees is proving impossible for Adeline Edmonds. Her heart is set on creating a charitable school for the poor of London. Viscount Marryam has his heart set on Adeline Edmonds, but the company she keeps could derail his ambitions. 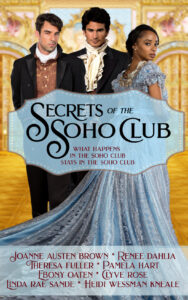 Clyve Rose, The Case of the Black Diamond
Nicknamed ‘the lonely lord’, Alexander Lindsey has spent a decade spying for the King and believes himself immune to surprises – until he meets Miss Ryan. Claire Ryan doesn’t swoon, and doesn’t blush – but when the Regent’s jewel is stolen, Lord Lindsey turns up at The Soho Club, asking questions. Soon, Claire and Alexander are investigating each other.

Linda Rae Sande, The Making of a Mistress
Miss Daisy Albright has volunteered to assist in exposing the man behind a smuggling ring operating in Yorkshire. Her assignment will require she become the mistress of the suspect. Now if only she can convince Alex Bradley to execute her plan. He’s positively appalled at learning what she wants him to do—at first.

Fiona M Marsden, Mine on Thursday
Angelina Delacourt has been engaged to Sebastion Smith-Davenport for five long years, with no sign of nearing the altar. Angelina cares not for gossip. She owes Bastion her life, and she’s prepared to endure a loveless engagement and marriage to protect his reputation. But Angie knows she’s missing out on something, and fellow Soho Club member Jasper DeMello is willing to provide that certain something.

Ebony Oaten, There’s Something About Miss Mary
Miss Mary Callingsbrooke knows there’s something terribly wrong with her. Her body reacts in such an unnatural way when she’s close to a handsome gentleman. Mary meets the mysterious Mister Smith at the Soho Club, who shows Mary that her ‘faults’ are in fact incredibly attractive features. He’s more than happy to marry Mary, but why the haste?

About the Book: Secrets of the Soho Club

Ten Regency novellas for less than $1.

Excerpt from The Case of the Black Diamond, by Clyve Rose:

Outside The Soho Club, dark clouds gathered in the afternoon sky. The air thickened, closely heavy in the prelude to a drenching. Claire shivered at the change in temperature, the tensing of mood. She sipped her coffee, watching Xander Lindsey, watching her. His gaze seemed focused rather closely on the rim of her cup, specifically where the fine china met her lips.

She sipped her brew again. “If you’re intent on seduction, you should know I am not my sister.”

His gaze lifted to her face, steady, focused, powerfully intent. “I have never seduced your sister. I am no rake, Claire.” His voice remained sure, strong, and deeply tempting.

He inclined his head, his “mmmm,” resonating low in his throat, like a throb. “We can’t all mask our clandestine activities with scent.” His tone turned husky, intensity sharpening like a honed blade.

“There’s a remedy for that,” he said quietly, suggestively. Did his voice deepen further? How deep does he—stop it.

As though he’d heard her, Xander set down his cup. He walked slowly towards her, the way one might approach a rare and dangerous object.

“Tell me, Claire Ryan, are you armed?”

“Because I should like to kiss you. If I halt here, you may blade my heart open instead,” he stopped halfway across the chequered floor, arms by his sides like a supplicant. A supplicant with warm brown eyes, and a devastating dimple.

Claire affected a study of the distance between them, lifted her head, locking her gaze to his.

“Three steps back gives you a sporting chance, Xander Lindsey.”

“Indeed?” The resonance from his baritone rippled through her. Nevertheless, he held his ground and Claire lifted a brow, gaze travelling brazenly over his planed face. He stared right back, smiling, offering that dimple where she lingered before studying the cleft in his chin, his corded neck muscles, those powerful shoulders of defined shape. Her gaze dropped lower, taking in his broad torso, narrow waist, and the shapely front of his trousers. She smiled then, wide and joyous, walking slowly towards him, slower than ever, as though she may never reach him, never touch him. Time stretched out, thinning, heating, bringing her closer to the heft of breath beneath flesh, her pulse beating faster with each step until her skin throbbed with the thought of his lips beneath hers, his surrender within her body.

“Something to savour,” she murmured, watching his answering smile. His tongue darted out, licking his lips and she let out a small laugh, not blinking at all. Not missing a moment of Xander Lindsey standing before her, arms at his sides, gaze locked on hers with an impulse she felt in every nerve and muscle. Claire touched his cheek, stroking him gently before leaning forward, lips positioned inches from his. Reaching up, she slipped her other hand beneath his jacket, sliding her palm over his shirt, feeling his breath shorten, his weight shift…until she located his hidden jacket seam. Keeping her gaze on his, she extracted his pistol as smoothly as possible, stroking the barrel along firm muscle as she withdrew. She kept his barrel there, smoothing it lightly back and forth against his shirt, teasing him with danger, with steel, with her unbroken gaze.