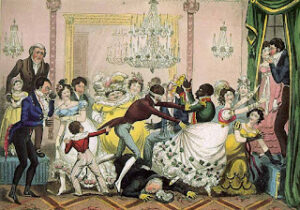 It has come to this author’s attention that the mysterious Miss E—, about whom the most scandalous rumours have been circulating since the beginning of the Season, will be among the guests at Godstone Abbey. What can Lady Westfield—who is usually most discerning when selecting guests for her Christmas houseparty—be about? 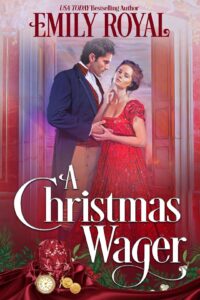 Far be it for this author to cast aspersions on a young lady’s eligibility, but Miss E—, despite displaying  a soupçon of breeding on occasion, is not averse to using a turn of phrase which would make even a Cyprian blush, with her extensive catalogue of anatomical terms. Miss E—’s guardian, Sir A—E—, himself notorious for being what can only be described as a committed bachelor, has been decidedly unforthcoming over the circumstances by which the previously-unheard-of young woman became his ward six months ago. Young ladies don’t just spring fully formed from the ground, neither do they fall from the heavens. And, as every accomplished tattler knows, Dear Reader—the less one is willing to disclose about one’s origins, the more there is to be divulged.

What has piqued this author’s interest in particular, is the anticipation of Lady Pandora Osborne’s presence at Godstone. As the year draws to a close, Lady Pandora’s quest to prove herself the premier matchmaker the Ton has ever seen, enters its final act. She has one more match to make, to secure her crown, Godstone Abbey is to provide the backdrop for her finale.

And what a finale it promises to be! For, the intended bridegroom must be none other than the Duke of S—. And, while this author concedes that His Grace is the most eligible bachelor in England, he’s renowned for a degree of discernment that has hitherto rendered him notoriously difficult to catch. Many desperate mamas have tried—and failed—to secure him for their daughters.

Surely Lady Pandora cannot have elevated her ambitions so high as to consider a pairing between Miss E— and His Grace? While this author applauds her ladyship’s ambition, this final hurdle may prove unsurmountable, even for a thoroughbred of Lady Pandora’s tenacity.

If Miss E— is the intended bride, then Lady Pandora’s fate now lies on a knife’s edge. Either glittering triumph, or calamitous downfall awaits her. 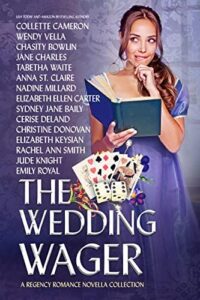 After surviving destitution, the orphaned Eleanor Hawkins re-enters society with a new identity, courtesy of her guardian, Sir Arthur Evans. With a penchant for pickpocketing, learned on London’s streets, Eleanor’s out for revenge on a society that abandoned her—especially Montague Lockhart, the man who broke her heart and brought about her downfall.

Lady Pandora Osborne is determined show her matchmaking prowess by securing a match between committed bachelor Montague Lockhart, Duke of Sedgewick, and Sir Arthur Evans’s new ward—an utterly unladylike young woman, whose origins are shrouded in mystery. Where better to achieve her aim than a Christmas houseparty, where mulled wine, mistletoe, and the season of goodwill is enough to tempt even the most miserly lord into love?

A Christmas Wager is part of The Wedding Wager anthology:

Lady Pandora Osborne claims she’s the finest matchmaker the Ton has ever seen. When her cousin challenges her to make good on her claim, or lose a precious family heirloom, the terms of the wager are set! Lady Pandora must produce one match each month between the notoriously unmarriageable—spinsters, bluestockings, rakes and fortune-hunters.

This unique collection of tales of unlikely matches and steamy shenanigans in Regency England is released on September 27th, but can be pre-ordered at a discount here:

Extract from A Christmas Wager

Still gazing at the chandelier, she walked forward, then collided with a solid wall of muscle.

“Pardon me,” a deep voice said, in a tone which made the apology sound like an insult.

The arrogance in his tone was matched by the contempt in his eyes—clear blue eyes in a savagely handsome face, surrounded by a mane of thick black hair.

He must be a figment of her imagination, made manifest by years of despair.

She closed her eyes, but though it brought about blessed darkness, the familiar scent invaded her nostrils—the scent which she’d once found so comforting, but now associated with betrayal.

When she opened her eyes, he was still there—tall, broad-shouldered, domineering.

“Oh!” Lady Westfield cried, breaking the spell. “Miss Evans, may I introduce Montague Lockhart—Duke of Sedgewick.” She turned to him. “Your Grace—this is Miss Evans.”

His attention, which had been focused on Lady Westfield, now turned to Eleanor, and she caught her breath, as her heart stuttered in her chest.

But he showed no sign of recognition. Instead, he clicked his heels together and gave the slightest of inclinations with his head.

Then he turned his back, and walked away.

USA TODAY Bestselling Author Emily Royal is a mathematics geek who grew up in Sussex, England and has always had a passion for romance and bad boy heroes in need of redemption. She now lives in rural Scotland with her husband, two daughters and a menagerie of pets including Twinkle, an attention-seeking boa constrictor.