Out of Place & Time 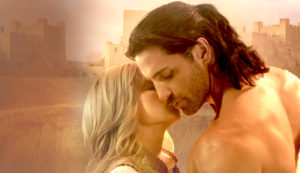 Riorden de Deveraux slammed to the floor with the wind knocked out of him. He growled in outrage, threw his cape out of his way and put forth his sword ready to encounter the fool who dared to take him unawares. 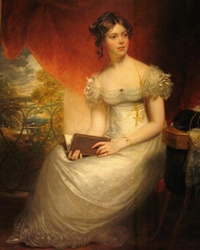 A startled gasp rang out and a young woman, oddly attired in a type of gown he was unfamiliar with, all but ran from behind a counter in his direction. She appeared frantic and Riorden once more looked about him for the danger that surely plagued him and the woman who rushed to his side.

Seeing nothing imminent that he should fear, lest ’twas a bookshelf that would topple over upon him, he sheathed his sword and took in his surroundings. By God’s Wounds! Where was he and how did he get in a place filled with books of all places? Last he remembered he was in the middle of a siege at Berwyck Castle near the Scottish boarder.

“My Lord de Deveraux.” The woman spoke his name as if they had met afore but he had no recollection of her, nor of this place.

“I am but a knight, my lady, and have not assumed my father’s title,” Riorden declared, not wishing to think of his father and Marguerite together.

The woman nodded and took his arm. He must be losing his edge if this slight little miss did not fear him. “Yes, yes…of course. I really must insist that you come with me, sir knight.” She looked over to a room full of people. “We would not want you to encounter your other self now would we? It could mess with the whole time continuum.”

Riorden’s brow rose. The woman’s mind was surely addled. “Have we met?” he asked warily.

She gave a pleasant enough smile. “We will one day…with the exception of meeting now I suppose. I know this seems a little confusing but I have someone who can straighten this all out for you. I am Lady Constance Whittles, by the way. I work for Mrs. Marlowe, the owner of this establishment.”

“My lady,” he murmured with a hasty bow, still unsure of this woman who seemed desperate to usher him to a remote area of the bookshop. He had no time to dally with a woman this day. He must needs return to Berwyck to guard the Devil’s Dragon of Blackmore, not that Dristan could not do so himself.

Lady Constance came to a door that she opened and waved at him to enter. “She is just inside, Lord de Deveraux.”

He frowned, both over the title and his puzzlement over the situation he found himself in. “Who is?”

“You shall see.” With the slightest push, Riorden found the door closing, almost slamming shut on his sorry arse.

He stared, opened mouthed, at the woman sitting behind a desk. She set her quill down, crossed her legs covered in curious blue hose, and clapped her hands in glee. “Riorden! How good to see you again. Oh! Would you look at that, you’re younger than the last time we met.”

“We have not met afore, madam. I am sure I would remember you had we done so,” he declared through pursed lips. A giggle escaped her; the woman must be as daft as the Lady Constance.

“I think not,” he answered, folding his arms across his chest.

“So stubborn. Why I created such a trait in you is beyond me,” she mumbled more to herself than for him to overhear he supposed.

“Who are you?” Riorden demanded. “Why have you summoned me here, witch? You must needs return me to Berwyck posthaste.

She began playing with the feather on the quill. “What part of your question should I answer first?” She smiled and sat there as patiently as could be as though she had all of Time to await his answer.

Riorden fumed. “Who are you?” he asked again.

“Gosh you’re gorgeous when you get all riled up. Temper flaring, blue eyes blazing. Dang I did a good job with you. No wonder Katherine is going to fall in love with you.”

“Just who the bloody hell is Katherine?” 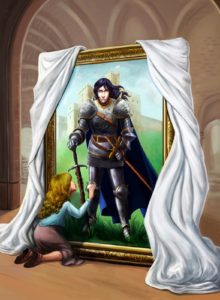 “You’ve been dreaming of her,” the lady declared calmly. “A woman, not of your time, comes to you when you sleep. Short, blue-green eyes, tawny colored hair. She’s been doing the same with you since she was a small child.”

“H-how did you come by such information,” he sputtered. He had not told anyone of the dreams he had been having of late. They had disturbed him for the woman was much like a ghost haunting his every waking hour.

“I told you, I’m your author. Of course, I know everything about the both of you. I’m sorry I had to put you through so much with Marguerite but she was never meant for you. Your life will be tied to another.”

“You know nothing of my feelings for Marguerite.”

“Yes, I do, but that doesn’t matter now. I just wanted to meet with you briefly to let you know that all will be right in your world soon. I’d also appreciate it if you’d get out of my head in the middle of the night and stop grumbling about how to write what’s going on at this very moment. It’s very irritating when we could have had this conversation during normal working hours.”

“You are a witch,” Riorden said crossing himself and unsure what this woman would spout about next. “You are jesting with me and I do not like it. Return me from whence I came.

“Funny thing about a quill,” she continued examining the writing instrument as if she didn’t hear him. “I always plan on my stories to go one way but you characters always pull me in other directions. You told me we were connected recently, that you could feel my need. Well, that’s why I’m here to end your hurt and disappointment over Marguerite. You will be given your heart’s desire, Riorden. You just have to be a little patient.”

She stood and came over to him. Afore he knew what she was about, she pulled upon his armor, rose on the tips of her feet and kissed both his cheeks. She then held his face between her hands staring up into his eyes.

“I will live on through you, Riorden, long after I have left this mortal world. The words I’ve written about your life, and the others who will follow you, will be found forevermore between the pages of my books. Thank you for being a part of that. Be happy, Riorden, that you will one day find a love to cherish for all time. Not everyone can be so blessed.”

One moment he was in a far off distant land with that strange woman, and the next he was dodging a mace aimed straight at his head. Thrust back into the heat of battle, he would credit his hallucination to the cut that slashed across his forehead and not the ridiculous notion that he had just somehow traveled through time. Mayhap, he had even dreamt the whole damn thing… 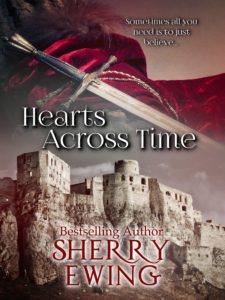 Riorden de Deveraux can be found in Sherry Ewing’s special edition box set, Hearts Across Time (The Knights of Berwyck, A Quest Through Time Novel (Books 1 & 2) available for just $0.99. He is also a secondary character in Sherry’s debut novel If My Heart Could See You that is the beginning of her Knights of Berwyck, A Quest Through Time series. Lady Constance Whittles is a secondary character in Under the Mistletoe that is also available as of May 8, 2016.

Scandal at the Masquerade Ball