Whilst I know you are all fond of the latest on-dits, I have recently come across an intriguing letter detailing the most scandalous conduct of several members of the well-known Scottish noble family, the Grants of Strathburn. Of course, the Jacobite Rebellion—the ’45 was long ago—but this absorbing missive penned by one of the domestic staff of the Earl of Strathburn’s household will have you enthralled, Dear Readers. Such shocking goings-on—treasonous conduct, filial betrayal and the attempted corruption of a good young woman. Be sure to have your smelling salts (if not a sherry) at hand!

Oh, what a to do! I hope this letter reaches you in time, my sweet sister. I have a favor to ask of you on behalf of the bonniest lass, a Miss Jessie Munroe. Through no fault of her own, has been thrust into the most dreadful set of circumstances…

You, perhaps even better than I, will know what a devil the son of the house, Mr. Simon Grant can be—I’m sure he pesters the young female servants at Strathburn House just as much as he does here at Lochrose. Miss Munroe—she is the daughter of Lord Strathburn’s newest factor—has only been here a few short weeks and already the poor lassie has been plagued by Simon’s unwanted advances. She came to me in such a state this morning—shaking and crying—and told me such a horrid tale, I felt duty bound to help her. You see, Simon has threatened to have her father dismissed if she does not become his mistress. She is a beauty to be sure but I cannot stand by and see such a sweet girl be ruined by such a depraved lecher. 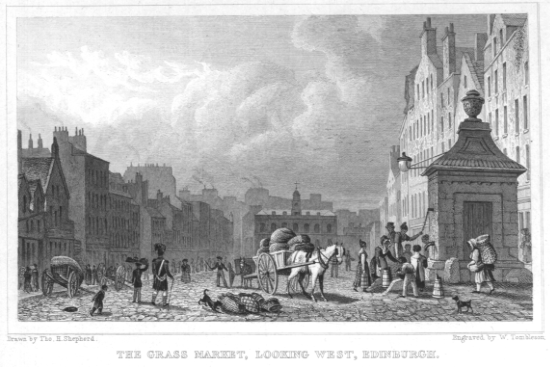 With no one else here to look out for Miss Munroe, I decided to intervene. And yes, I can see you now, Margaret, shaking your head at me for risking my position as Lochrose’s cook, but I could not live with myself if something dreadful were to happen. As I pen this missive, Miss Munroe is on her way to a place of hiding—somewhere Simon will not think to look—until she can catch the public coach to Edinburgh; it passes through Grantown-on-Spey two days hence. Once she reaches Edinburgh—and God willing she will do so safely—she plans to stay with her cousin, one Maggie Henderson. She and her husband have rooms (above Henderson’s Tea Emporium, the Bow Well, in the Grassmarket). So, my dear sister, I was very much hoping you would seek out Miss Munroe next time you visit the Grassmarket—I will not rest until I hear that she arrived in the capital unscathed. 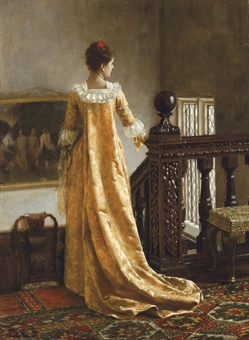 Now, I know you must have been wondering whilst you read all of this, why Miss Munroe’s father has not taken action himself. He is a good man (and a canny manager from what I’ve seen) but unfortunately, he is away on estate business for his lordship and will not return for several weeks. Of course, Lady Strathburn does nothing but turn a blind eye to her wicked son’s misdeeds—his whoring, his gambling, his general profligacy. I’m sure you see much more of it then I considering he is often in Edinburgh. If it wasn’t for the new factor, I’m sure the estate would soon have gone into debt.

And as for Lord Strathburn, you ken as well as I that he has not been the same since Robert, the young Master, disappeared after Culloden. It is hard to believe that it has been over a decade since that fine young man rode out for the Clan against his father’s wishes. You and I have both heard the rumors of how Simon had his older brother arrested after Culloden, but somehow, the canny wee devil managed to escape. I’ve always wondered if the earl himself had a hand in the business… As Lord Strathburn has not disinherited Robert (which he is entitled to do given Robert committed treason against King George) nor sought to declare him deceased, I quietly hope that one day Robert will return. The Master will need to seek a pardon of course… And then there is the problem of Simon and Lady Strathburn—I’m sure the pair would go to any lengths to prevent Robert reclaiming his birthright.

Och well, I can hear you saying now, Margaret, it is not for the likes of me to speculate or make comment. I trust you are well and as soon as you hear any news about Miss Munroe, you will convey it to me forthwith.

The Master of Strathburn by Amy Rose Bennett releases on May 15 with Harlequin’s Escape Publishing. 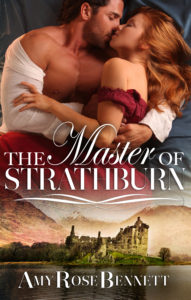 A sweeping, sexy Highland romance about a wanted Jacobite with a wounded soul, and a spirited Scottish lass on the run.

Robert Grant has returned home to Lochrose Castle in the Highlands to reconcile with his long-estranged father, the Earl of Strathburn. But there is a price on Robert’s head, and his avaricious younger half-brother, Simon, doesn’t want him reclaiming his birthright. And it’s not only Simon and the redcoats that threaten to destroy Robert’s plans after a flame-haired complication of the feminine kind enters the scene…

Jessie Munroe is forced to flee Lochrose Castle after the dissolute Simon Grant tries to coerce her into becoming his mistress. After a fateful encounter with a mysterious and handsome hunter, Robert, in a remote Highland glen, she throws her lot in with the stranger—even though she suspects he is a fugitive. She soon realizes that this man is dangerous in an entirely different way to Simon…

Despite their searing attraction, Robert and Jessie struggle to trust each other as they both seek a place to call home. The stakes are high and only one thing is certain: Simon Grant is in pursuit of them both…

You can find out more about Amy Rose Bennett’s books here and connect with her on social media here.

Out of Place & Time