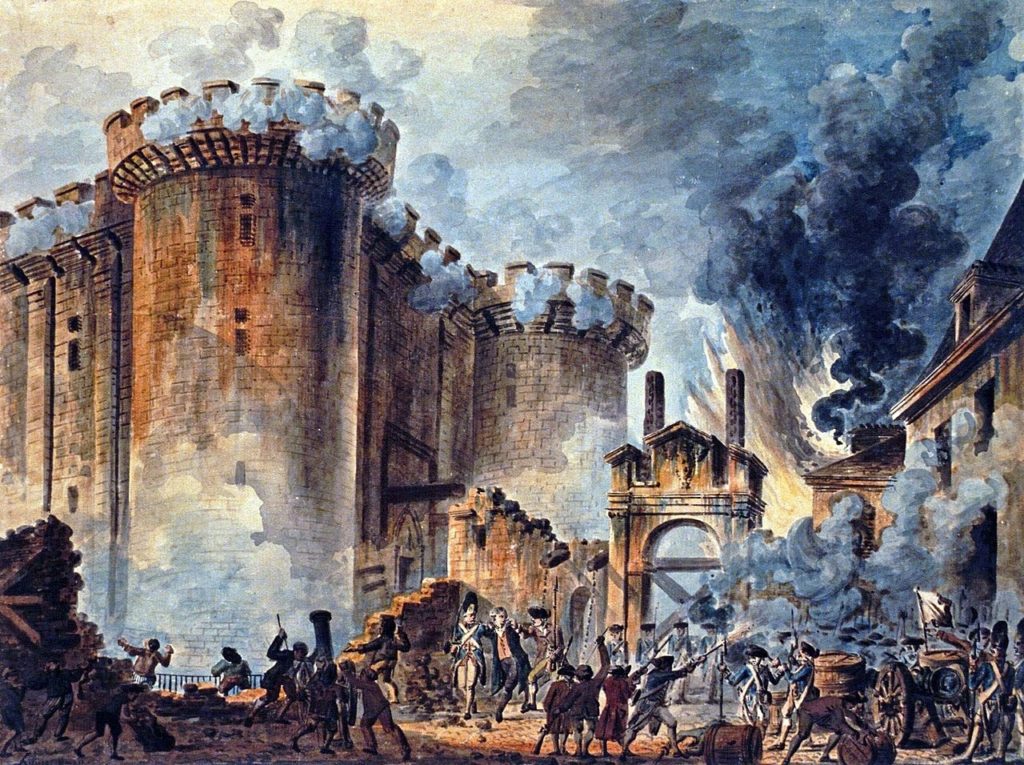 Francesca sat at a table with her fellow conspirators. All night they sang songs to give them courage. People had been arrested and tossed into the Bastille for the slightest reason.

“It’s not right. We will free the prisoners. We want justice,” Armand shouted.

“We want food,” shouted several others.

The crowd went crazy with anger and too much drink.

“Are we really going to attack the Bastille tomorrow?” She whispered to Pierre besides her.

“If they don’t surrender the prisoners, we will. Come up to my room, and I will show you the plans.”

She pushed him away and got up. It was her shift for clearing the tables, not that she’d go anywhere with him. All the girls knew Pierre, so she didn’t have to.

As soon as she had a full tray of dishes and entered the kitchen, Chloe pulled her aside. “Did you see this in the newspaper, Francesca?”

“It says there are vampires in the city. The rumor is they are waiting for a war, so they can feed on the fallen in the open.”

Francesca put the dishes into the large sink. She separated out the empty pints. “Chloe, you are funny. There is no such thing as vampires.”

The girl crossed herself. “You don’t believe. Oh, Francesca, may God protect you.”

Francesca smiled while tying her kerchief on her head. “I’m done, and may God protect you, Chloe. I’m off to pray.” She walked out the back door into the dark on her way to Notre Dame.

As she hurried around the corner, she ran past a gentleman with a tall hat. He didn’t follow her, and she was relieved. Francesca didn’t want to admit it but the talk of vampires chilled her to the bone. She pulled her shawl closer about her shoulders and looked behind her. No one was there. 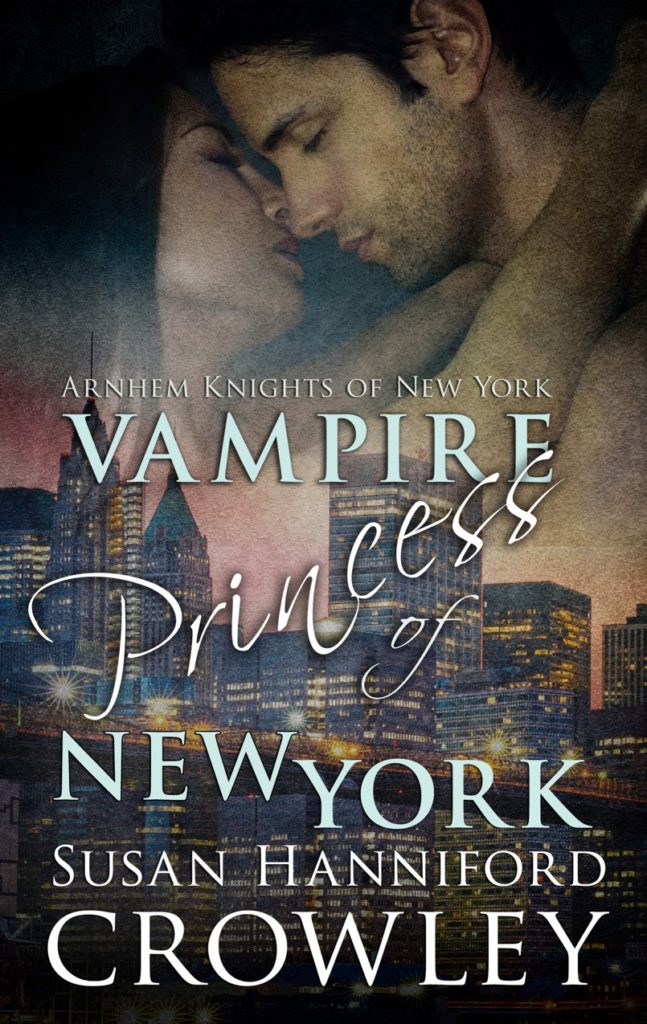 They all laughed with the French vampires around the table, finishing a grand meal. As the Arnhem Knights retreated to the large meeting room on the main floor, the royal family moved to a parlor off the main bedroom.

Max and Evie took the love seat closest to the blazing fireplace. Jacques, Margot, and Louis took the sofa and Donovan and Noblesse the other chair. The seating was a loose half-circle around the fire.

“How did you become a vampire, Francesca?”

“We hadn’t heard from you, Mama. Then Grand-mère died. I had nothing. When I told the priest I was going to Paris to find you, he gave me some coins, and with Grand-mère’s last sweet bread wrapped in cloth, I started walking. Afraid, I went to Domrémy first to pray, to ask the aid of Sainte Jeanne D’Arc. Then I walked until it was dark.”

“I had no choice. There was no one to walk with me. The first night I was attacked by bandits. They took the little I had, tied me to a tree, and talked how they would use me. I was fortunate that they drank themselves into a stupor. It was my one chance to get away, but my bounds were too tight. Then I saw her.”

“The Maid herself in armor and sword. She cut my bounds and said one word, ‘Run.’ I ran until morning and found refuge for a few hours in a small church many villages away. I don’t know how many days or weeks I walked begging food and sleeping in churches.

“When I came to Paris looking for Marie Therese Aquilla, no one knew you. Unable to find you, I took cleaning jobs and fell into the spirit of the Revolution. I held a sword shouting protests to free the prisoners. Then we stormed the Bastille. I was shot and remember falling.”

Margot wept and leaned on Jacques.

“Max picked me up, carried me away, and made me a vampire.”

Max interrupted. “She was a magnificent warrior. Still is for that matter. I told her that she was the noblest of creatures. I named her Noblest.”

Noblesse smiled and added, “I named myself Noblesse, because I thought I was damned. It took me a long time to adjust to being a vampire. Max, being an excellent father, was very patient. He taught me how to be a civilized vampire, and how to run what would become an international business.”

Margot sighed and wiped her eyes. “You became a vampire because of me.”

“No, Mama. I believe that I’ve been watched over. I have not always believed I was fortunate, but now I know I am.” Noblesse kissed Donovan on the cheek. “I’m a very happy vampire. Don’t cry, Mama. How did you become a vampire?”

Margot smiled and held Jacques’s hand. “I was working in the kitchen of the palace, when Princess Sophie became ill. The queen heard I had experience as a healer and asked to see me. Only nobility could touch the royal children, so the queen had me finely dressed and called me ‘Lady Aquilla’. She told her ladies that I was robbed while traveling, and afterward mistaken for a commoner. She said that the name belonged to a noble family of Italy. I did not argue with the queen. The baby princess was gravely ill, and she asked me to help her care for the child.”

Louis looked straight into the fire, pain etched on his face.

“I tried everything I could think of for the little one, but she died. The queen did not blame me. Then I became ill, and she hired Jacques and his sister Gabrielle to care for me. She did not miss that I cared for Jacques, who did a variety of jobs at the palace.”

Jacques said, “When I knew your mother was dying, I changed her. The queen heard she had died and paid me to provide a proper burial for the ‘sweet lady’. I had to buy a casket and have a mass and burial. I purchased the plot in St. Marguerite’s. In the middle of the night, I dug her up so she would not awaken terrified of being buried alive.”

“What happened to your sister?” Noblesse asked.

“When she became ill, I tried to change her too. She did not survive. Gabrielle is buried in the grave at St. Marguerite’s.”

“How did you become a vampire, Louis?” Max asked.

“I don’t want to talk about it. You may if you wish, Father.” Louis continued to stare into the fire.

“We smuggled Louis out of Temple Prison. He was only ten. We replaced him with another boy’s body already dead from disease,” Jacques said.

“Some of the books say that there were witnesses with him when he died.”

“Mesmerization is a wonderful tool.” Noblesse’s mother smiled and winked at Donovan.

“But there is DNA evidence from the Prince of France’s heart interred at St. Denis,” Noblesse said.

“Ever hear of tampering with evidence?” Jacques asked. “It was in Louis’s best interest that the world think him dead.”

“You aged him with Shuma Moot?” Max asked.

“Yes. We needed to age him fast, so we could leave Paris for a while,” Jacques said.

Louis looked angry and sad at the same time, but he didn’t add to the conversation on his life. Noblesse felt torment radiating from him. She reached into her pocket and took out the little book.

“We are family here, wouldn’t you agree, Louis, my brother?”

“A French writing desk that Donovan bought for me survived the explosion at the Arnhem Society, though it did break in half. In it we found the little book with the information about my mother and Jacques. It’s a dear book written by a mother, mostly about the love she had for her children.”

Noblesse stood up and walked over to Louis, who looked confused. “It has helped a great deal in my life. I give to you, because by rights it is yours.” She handed him the book, and he opened it.

“What is it, Francesca?” her mother asked.

“It is a diary of Queen Marie Antoinette, hidden for centuries.”

Louis’s expression melted into sorrow, as he read. A blood tear slipped down his cheek. “Thank you, my sister Francesca.”

Noblesse returned to snuggle with Donovan in the love seat. The family sat quietly together watching the fire for a long time.

Louis stood facing the fire, swinging his arm as if to throw, but in the last minute held the little book against his heart instead.

Noblesse is the daughter of the Vampire King of New York Maximillion Vander Meer. In his absence, she is the CEO of VMeer Industries and is an Arnhem Knight (a vampire warrior sworn to protect human life in New York and render aid to other supernaturals.)

But in the over two hundred years, she’s been a vampire, Noblesse has never found a true love or discovered what happened to her mother who disappeared just prior to the French Revolution.

Noblesse has to choose between two men. Both profess their love. Both are keeping a secret from her. One wants to destroy her, and one wants to love her forever. But which one?

Susan has been writing since she was 8 years old. She started out writing animal stories as a child and grew into a science fiction and fantasy author. Her short stories appeared in anthologies edited by Marion Zimmer Bradley. Her novella Ladyknight published in the Spells of Wonder anthology went international. In 2006, a friend suggested paranormal romance and it’s been her passion ever since. Currently, she has two paranormal romance series, a mythology romance, and a steampunk romance. Susan specializes in vampires and rare supernaturals. She enjoys incorporating historical mysteries and places of interest into her novels, and does intense research.

Susan, the founder of the Nights of Passion blog, a member of RWA and SFWA,  speaks at scifi and romance conferences. In her day job, she is a webmaster. Married for 38 years, she is a mother and grandmother. Her goal is to give her readers as much fun as possible. Susan believes we all need more fun in our lives.

(I still have some room for friends on my profile. Please, say you’re from the Tattler!)