Thomas, the second Baron Lyttelton, has died under mysterious circumstances. 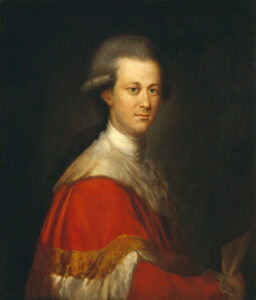 Rumors concerning his death abound. He was an infamous rake, known for using his charm and talent to seduce women and gain influence. He fought duels, gambled away a fortune, and married the misguided Aphia Witts to pay his debts before fleeing to Paris with a barmaid. Upon his return in, he entered the House of Commons in 1768 and exited the next year after being accused of bribery.

Thursday last, 25 November, 1770 Lord Lyttelton told friends of an extraordinary dream he’d had the previous night. A bird had flown into his room, transformed into a woman wearing white, and informed him that he’d die within three days. He discounted the dream, attributing it to a recent party he’d attended where a robin had flown into the room. He was accustomed to a woman’s scorn, so that part of the dream seemed easy enough to explain.

By Saturday evening, he boasted he would “bilk the ghost” and ordered breakfast for the following day. He retired shortly after. Just before midnight, lying in his bed, Lyttelton’s valet said his master died “without a groan.” There was no inquest.

According to close friends, the only legacy he leaves behind is a reputation of questionable character as a compulsive gambler, drug addict, and debaucher of women. So, The Teatime Tattler asks,  was his death an act of vengeance? Or did karma finally come calling for the wicked baron? 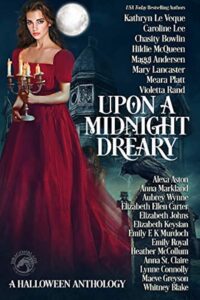 Upon a Midnight Dreary is up for preorder and will release this month, October 21.

This amazing anthology contains dark, romantic tales of ghosts that haunt and taunt, written by some of your favorite historical romance authors. Each novella will include a romance and a “real” ghost story. Aubrey Wynne’s contribution includes the wicked Lord Lyttelton.

Ellie nibbled at a candied apricot as she snuggled against Percy’s chest. They had foregone supper, moved to their bedchambers, and now ate a cold repast spread about the counterpane. “I heard the most delicious tale the other day. Did I tell you of the wicked Lord Lyttelton?”

Percy smiled and kissed the top of her head, the blond waves spread over her bare shoulders. His limbs were heavy, and he couldn’t care less about some rakish peer. “No, love.”

“He was a baron with no regard for mankind, wasting his money and seducing innocents. One mother was so horrified when her daughter succumbed to his advances, she died of a broken heart.” Ellie paused while she took sip of wine. “But the mother had the final word.”

“They always do,” he agreed.

She slapped his arm but grinned. “Anyway, she returned as a ghost and told him of his looming demise. Three days and he would be dead.”

“Ah, but one can do so much living in three days.” He picked up a hunk of cheese and offered Ellie a bite. She shook her head.

“Well, a quarter hour before midnight of the third day, he dropped dead! Can you imagine?” She sank her teeth into the blue and white Wiltshire and smacked her lips.

“People die every day, my dear. It doesn’t mean an apparition caused it.”

“This happened forty years ago, but there is much documentation. And it gets stranger.” She kissed his cheek. “The wicked lord stopped by his friend’s bedchamber on his way to Hell. The man saw the baron at the foot of his bed, miles away in another county, the same night he died. He woke his household to look for the scoundrel since Lord Lyttelton was known for his pranks. But alas, he was never found.”

“Because he was dead.”

“Exactly!” She beamed at him as if he’d done something very clever.

Percy snorted. “You have a way of maneuvering our conversations until it appears I agree with you.” He kissed her soundly on the mouth.

“Don’t you?” she asked, batting her eyelashes.

Bestselling and award-winning author Aubrey Wynne is an elementary teacher by trade, champion of children and animals by conscience, and author by night. She resides in the Midwest with her husband, dogs, horses, mule, and barn cats. Obsessions include wine, history, travel, trail riding, and all things Christmas. Her Chicago Christmas series has received the Golden Quill, Aspen Gold, Heart of Excellence, and the Gayle Wilson Award of Excellence and twice nominated as a Rone finalist by InD’tale Magazine.

Aubrey’s first love is medieval romance but after dipping her toe in the Regency period in 2018 with the Wicked Earls’ Club, she was smitten. This inspired her spin-off series Once Upon a Widow. In 2020, she launched the Scottish Regency series A MacNaughton Castle Romance with Dragonblade Novels.

Sign up for my newsletter and don’t miss future releases