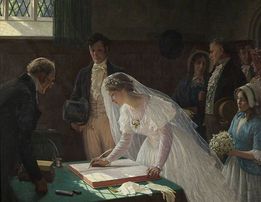 Another letter has arrived from a lady whose correspondence appeared on these pages some weeks ago, and she has more news that I know you will find interesting. Without further ado… 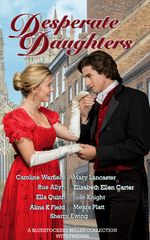 I was ever so thrilled at the successful forwarding of the Teatime Tattler to my temporary abode in York. I daresay that a more convivial social circle could not be found anywhere, not even in London. Alas, I will be returning soon to the country, for the Season has come to an end—a most spectacular end filled with marital triumphs, one of which occurred right under my own roof!

Did I not tell you that Major A.K., a great hero of the recent wars, is residing in my widowed daughter-in-law’s home in York as my grandson’s guest? And did I not proclaim that he (the Major, not my grandson) and she (my daughter-in-law) are of an age to be quite suitable?

Oh, what marvelous news! The announcement will soon appear in the London papers. But you, Mr. Clemmons, and your readers will know first: Major A.K. and Lady H.T. are engaged to be married!

Do ensure that my next copy of the Teatime Tattler reaches me at the new direction I’m enclosing herewith.

I am as ever, your faithful reader,

After years of tolerating her late husband’s rowdy friends, Honoria, Lady Twisden, has escaped to York where she can paint, investigate antiquities, and enjoy freedom. Then her stepson appears with a long-lost relation in tow, the perfect image of a long-ago relation whose fierce portrait made her shiver with mad imaginings.

Promised York’s marriage mart and the hospitality of his cousin’s doddering stepmother, Major August Kellborn is shocked to find that his fetching hostess is the one woman who stirs his heart. To win her heart, however, he must convince her he’s not just a perfect image, but her perfect match.

Major August Kellborn, late of his Majesty’s army, beat back an impulse to seize young Sir Westcott Twisden by the neckcloth and shake him.

He’d had long experience beating back that sort of urge with the young nodcocks he’d shaped into officers. He could do so now as well.

Gus paced to the window and looked out a sparkling clean pane onto the narrow street. Their traveling chaise wasn’t visible, but Sir Sancho stood unaccompanied, busily watering a lamppost.

Gus had been in his cups the day he’d met Twisden at a horse market in Brampton, else he wouldn’t have allowed the young pup the informality of his first name, respectable though Wes was. The malaise of his first long winter’s sojourn at Whitlaw Grange, his new estate near what was once the Debatable Land, had made him more sociable than was his wont.

Still, he’d found the friendly lad more sensible than most his age, and the family connection had intrigued him. His late mother had written frequently about the Twisdens, the jovial late baronet and his amiable wife. He knew of their mutual ancestor, Sir Ebenezer Twisden as well, and so, he’d jumped at the chance to visit Twisden Hall. His very resemblance to the old warrior was astonishing, and Gus had been impressed with the well-run estate. Much of it the late baronet’s sensible widow’s doing, Gus’s valet had learned.

And so, when Wes proposed visiting his stepmother and attending the York races and then sweetened the deal with the notion of a marriage mart—it had been a very long, lonely winter—Gus agreed to this sojourn in York.

He turned back to his young erstwhile host. “Practically doddering, you said.”

Wes looked up from pouring spirits from a flask into a tumbler. “What?” His blue-eyed innocence was genuine. Wes saw his stepmother as an ancient, when she could scarcely be much beyond thirty. He ought to have paid more attention to his mother’s descriptions of the Twisdens.

“I cannot stay under your stepmother’s roof, Wes.”

“She is not by any means doddering. She’s a widow, and one young enough that even with you here some of the time…” Wes had planned to depart for several days to visit his Grandmother in Harrogate. “The presence of a single man in her household might stir gossip.”

“She’s three and thirty and is known to be very proper. Plus…” He glanced back at the closed door and lowered his voice. “Though she’s clever and good, she’s plain.”

Gus gazed back at the now empty street. Perhaps plain was the right word to describe each of Lady Twisden’s entirely unremarkable features. But taken as a whole, he would call her appearance amiable, moving, and in fact… pretty. The spark in her eyes when she spotted him, the color rising in her cheeks, those had stirred him as well. 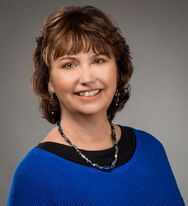 USA Today bestselling author Alina K. Field earned a Bachelor of Arts Degree in English and German literature but prefers the happier world of romance fiction. Her roots are in the Midwestern U.S., but after six very, very, very cold years in Chicago, she moved to Southern California where she shares a midcentury home with a gold-eyed terrier and only occasionally misses snow.

Whispers from the Countess of H. regarding Those Scamps, the Devereaux triplets!