Sebastian Beringer covered his notes with one arm, trying to do so in a way that would not draw fire from his angry employer. If need be, he would claim he was writing a love letter. The Merry Marquis, whose love affairs were legendary, would surely not snoop further.

On no account could he allow the man to know that he was actually writing his second article for the Teatime Tattler; not when it was the first article that had Lord Aldridge pacing the length of the study with quick, angry strides, ranting about ingratitude and charging Bas with finding out who on the crew of his sailing yacht was a cursed spy.

“You will not believe what this low-life scum wrote,” Aldridge fumed.

Bas could quote it word for word, having worked over it again and again in spare minutes, and read it six times in its splendid printed form in The Teatime Tattler. The extra money that Mr Clemens was paying would come in handy, though Lord Aldridge paid well. But the glory of being in print!

Not, of course, that he could ever claim it. That would be career suicide for a private secretary, whose job was to keep secrets. Possibly, as angry as his employer was, bodily suicide as well.

He was not quite sure what had the man in such a taking. Surely nothing in the article would come as a surprise to the London reader, already inured to scandal from the Merry Marquis and his brother, Lord Jonathan Grenford?

After all, it was a mere two paragraphs, about a yacht trip and a mysterious woman.

During his recent excursion to the ducal estate at Margate, the M.M., accompanied by his younger brother Lord J. G., sailed Lord A.’s private yacht to the southern coast of Essex, where they left it for several days.

Of what purpose was this voyage, our reader may ask? This correspondent was not in the brothers’ confidence, but can disclose that a certain woman’s name was mentioned several times. Who, you may wonder, is Antonia? And what is she to the M.M.? What, indeed, is she to Lord J.?

To find out the brothers’ destination and the identity of Antonia, read Jude Knight’s Revealed in Mist. And see below the blurb for an excerpt. 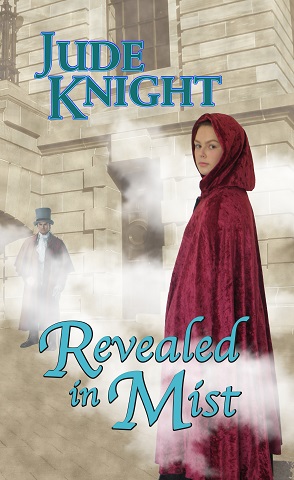 David joined Gren and Aldridge for dinner in a private parlour Aldridge hired.

“We need to return to Margate,” Aldridge said. “His Grace said Jon was to go there and stay. I tried to leave him behind, but you know what Jon’s like. He sticks worse than a burr.”

Gren made a rude gesture. “Aldridge only let me come because he needed someone to crew the yacht,” he told David.

Aldridge just grinned. “I have a crew. And you were not much use draped over the rail puking, Jon.”

“Yes, to Ipswich. His Grace’s spies at the castle will think we are on a pleasure cruise for a few days. It’s good the days are getting longer. We sailed at first light yesterday, then rode all day to get here. We can make it back again by tomorrow, late afternoon, if we change horses regularly.”

A succession of maids carried in dinner: a roasted bird, a leg of lamb, and a stew, with a variety of side dishes.

“The claret is acceptable,” Aldridge decided, and they talked about food and wine till the last maid left the room, blushing and dimpling at Gren.

“I think she likes me,” he told Aldridge and David.

“Do they not all like you, Gren?” David asked with a sardonic smile.

“I expect she likes your coin,” Aldridge suggested.