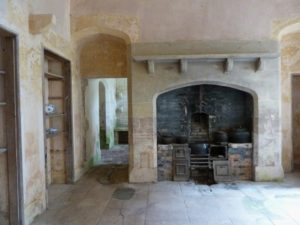 The boy was gone when I got back from the funeral. Little bastard. I told him I’d kick him to next Tuesday if dinner wasn’t on the table, but nothing was prepared, and he was nowhere to be found. And he’d let the fire go out. He’ll come back when he’s hungry, and I’ll have the skin off his back, see if I don’t.

Where else is he going to go? London? To the duchess? He is stupid if he thinks she’s going to want her husband’s by-blow, and so I told him when I took the money for his trip. I had a right to it, didn’t I? I took his mother back after the duke had finished with her. I gave her a home. I even let her keep the boy.

The duke owed me that money. Yes, and more. Made a harlot out of my daughter, and turned her off with a measly few hundred pounds. Then wouldn’t pay more when that ran out. Then, when my daughter lay dying and couldn’t keep house for me any more, that pernicious swine sent his wife to steal the boy I raised, promising him I don’t know what.

The boy said he’d stay till his mother died, and the duchess returned to London without him. And now my slut of a daughter is dead, and the boy can’t be found, but where could he have gone? He has no money for the coach fare, and it’s a long walk to London, especially with winter coming on, and the Black Mountains between here and England. 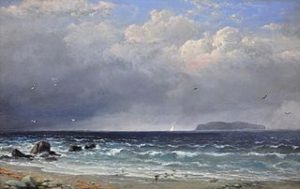 We didn’t find the lad till we was near Avonmouth. ‘E was hid in the coal, but we saw ‘im when ‘e tried to escape over the side. ‘E fair wriggled when we caught ‘im, begged us to let ‘im go. But ‘e owed us ‘is passage, and so I told him.

If we let away every lad who wanted a free trip over the Bristol Channel, we might as well set up as a ferry, and that’s what I said.

Give the lad credit, ‘e worked ‘ard. Four trips ‘e did wiv us, not counting the first. And then he left us in Bristol. I’d’ve kept ‘im on, I would. Good worker, that lad. I ‘ope ‘e gets where ‘e’s going.” 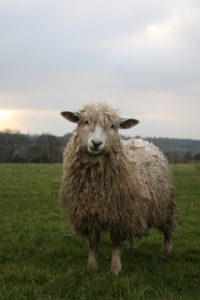 He was a mystery, young David. Turned up in a snow storm, he did. Bessie the dog found him when Matthew went out after the sheep, huddled up in the midst of the flock where they’d taken shelter in the lee of the old stone wall.

Matthew brought them all home: boy and sheep, the boy limping along on a stick because his ankle was swollen to twice its size. “I’ve a lamb for you to warm by the fire, mother,” Matthew said, and then stood aside. Just a sprain, it turned out to be, but a bad one. I would not turn man or beast out in weather like that, let alone a boy, and no more would Matthew, so of course we let David stay.

Where did he come from in that awful weather? Wales, he said, but that couldn’t be, could it? Wales is a long way away, across the wolds and then the water. And mountains, too, they say.

David was a good boy, so perhaps he was telling the truth. He made himself useful until he could walk again. He was a good hand in the kitchen, and he read to me and Matthew at night, which was a great blessing, for our eyes are not what they were. Not that I’ve ever read more than enough to piece together a few verses from the Bible. Not like David. It was a treat to listen to him, and I was sorry when he left.

But he had people waiting for him, he said, so off he went, off to London. We got him a lift as far as Oxford with Jem Carter. I hope he made it to his people. A fine boy like that? They would have been missing him, I’m sure. 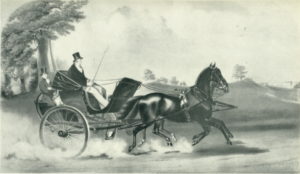 My tiger? He’s taken off. Ungrateful brat. Good boy with the horses, too. But there you go. That’s what I get for taking a boy off the streets. I found him in Oxford, you know. Oh yes, I told you before, didn’t I. He made sure I got back to my inn after a rather exciting evening. Didn’t rob me, either, though he could have. I was somewhat—er—elevated.

I told him to come back in the morning for his reward, and he was waiting outside in the stable yard when I woke. And all he wanted was to come to London with me. I bought him a suit of clothing, of course. Couldn’t be seen with him in the rags he had. Not livery. Not in Oxford. But I thought silver blue, to set off his dark hair. It would have looked stunning against my matched blacks.

We arrived last night, and this morning he was gone. Ungrateful brat.

Of course I didn’t let him in. A boy like that? Tidily dressed enough, and nicely spoken, but what child of substance is allowed to walk around the streets? But he wasn’t a street urchin, either. He asked if he could send a note, and he wrote it right there on a piece of paper I found him. Never was a street urchin that could read and write.

Anyway, I sent it in to the duchess. Told him he’d have to wait, but it wasn’t but an hour before Her Grace’s own maid came down to fetch him, and the next thing I knew, he was part of the household.

He seems a pleasant enough lad; always polite. But it just doesn’t seem right, raising the duke’s bastard under the same roof as his legal sons. The duke agrees, or so goes the talk in the servant’s hall. But the duchess got her way, this time. And we’re all to treat the boy as if he were gentleman. Her Grace has hired him a tutor, and word is he’s off to Eton in the autumn. And the little Marquis follows him around like a puppy dog.

What will be the end of it, do you suppose? 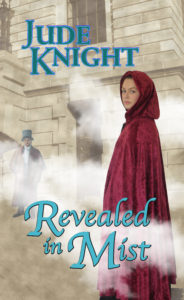 Last time spy Prudence Virtue and thief-taker David Wakefield worked together on a case, they parted in bitterness. When different employers send them to investigate a spying ring that blackmails aristocrats for access to secrets, they need to decide whether to combine forces.

Are they allies? Or opponents?

With friends and families too close to the investigation for comfort, they need to co-operate to find the blackmailer and the spy behind him.

They are professionals. They can work together without becoming entangled. But David and Prue find that murder, secrets from the past, and love can foil the most determined of plans.

Revealed in Mist is in final editing, and I’ll soon be announcing the release date. Keep an eye on my book pages to find out more.

An excerpt from Revealed in Mist

David frowned at the fire in the small hearth. The private parlour he had hired was small and shabby, but at least its size made it easy to heat. And it was neutral ground, which mattered. David hadn’t had a prolonged conversation with his expected guest in a decade and a half.

He must have been seventeen or eighteen on the last occasion, staying at Haverford Castle in Kent between the end of the school term and his first term at university. The Duke of Haverford’s son and heir, the Marquis of Aldridge, would have been 12. The day had begun happily enough with the boy tagging along while David went out after small game with a gun. It had ended with David beaten and driven from the property.

Aldridge had tripped and knocked himself out, and Haverford, finding David leaning over his unconscious heir, had not waited for explanations.

Once the young marquis left school and entered Society, they met from time to time, usually when the Duchess of Haverford insisted on David coming to one of her entertainments. Her husband, the duke, was almost always engaged elsewhere, but her sons often attended. They paid their mother the courtesy of not being rude to her protégé, and he responded with the same polite reserve.

He was expecting Aldridge now. Older brother to one of the courtesan’s lovers. David’s despised father’s oldest legitimate son. His half-brother.

A knock on the door heralded Aldridge’s arrival. A maid showed him into the private parlour. He’d clearly been treating her to a display of his facile charm; she was dimpling, blushing, and preening.

David examined him as he gave the girl a coin “and a kiss for your trouble, my darling.” The beautiful child had grown into a handsome man. David had heard him described as ‘well-put together, and all over, if you know what I mean.’ The white-blonde hair of childhood had darkened to a guinea gold, and he had his mother’s hazel eyes under a thick arch of brow he and David had both inherited from their father.

Aldridge navigated the shoals of the marriage market with practiced ease, holding the mothers and their daughters off, but still not offending them, and carrying out a gentleman’s role in the ballroom with every evidence of enjoyment.

But his real success, by all accounts, was with bored widows and wives, where he performed in the bedroom with equal charm, and perhaps more pleasure. Society was littered with former lovers of the Merry Marquis, though he had the enviable ability to end an affair and retain the friendship.

Aldridge ushered the laughing maid out of the room and closed the door behind her, acknowledging David’s appraisal with a wry nod.

“Wakefield. You summoned me. I am here.”

David ignored the thread of irritation in the young aristocrat’s voice, and took a shot in the dark. Lord Jonathan was unlikely to be the blackmailer, Lady Georgiana thought, but was probably also being blackmailed. Would he have confided in Aldridge?

“I have some questions I wish to ask about the blackmail.”

Aldridge arched a brow, a trick they had both picked up from the duke. “Tolliver has engaged you?”

David hid his surprise at the spymaster’s name. “What is your brother paying blackmail for?”

Uninvited, Aldridge grabbed a chair and straddled it, resting his chin on his forearms. “Our brother,” he said, flatly.

“That won’t prevent me from turning him in if he is a traitor,” David said.

“He isn’t. He’s young. He’s an idiot. But he isn’t a traitor.” Aldridge met David’s eyes with an uncompromising glare of his own.