Roman Magistrate And Slave On The Run

The Litterae
your daily source of news in Rome – the Eternal City
Dateline: the first year in the reign of Maximinus Thrax
(that’s 235 AD for you pesky Christian types)

The Senate today has announced a warrant for the arrest of Marcus Cornelius Drusus, one of Rome’s senior magistrates.

The praetor is wanted for questioning in relation to providing material aid to Senator Cato Claudius Germanicus, who was executed last month following a summary trail at which he was accused of treason against His Imperial Majesty, Emperor Maximinus Thrax.

The Magistrate is described as aged in his early 30s. He is tall, muscularly built with black hair and silver-blue eyes. He is known to be an accomplished swimmer and may be found in upmarket Baths in major cities. 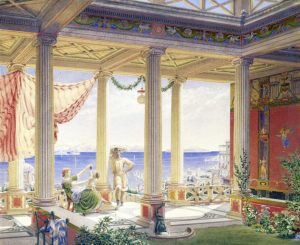 Baiae on the Coast of Naples. The acclaimed Seneca calls it a ‘resort of vice’

Reports from the provinces suggest that Marcus Cornelius is headed south towards the coastal resort city of Baiae where news has just reached us of the suspicious death of Agrippina Messalina Plinia, the magistrate’s ex-wife. It is not known whether there is a connection.

Sources close to the Magistrate say his absence from Rome may be related to his investigation into the mysterious Cult of Elagabalus.

The Litterae has learned that before his arrest, Senator Cato had been prepared to publicly name senior Roman officials involved in the group believed responsible for the murders of six boys as well as the death of a Greek doctor, Philomen Erasmus, in the past three months. 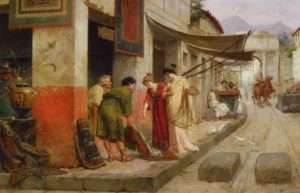 Marcus Cornelius is thought to be traveling in the company of a medicae, a female doctor by the name of Kyna who was a protege of Philomen Erasmus and has herself been questioned over her former master’s death.

We will be updating this story as news comes to hand. The next update will be on Aprilis XXVIII (April 28). Look for Dark Heart by Elizabeth Ellen Carter.

When the same group makes an attempt on her life, Kyna is forced to give up her freedom and accept Marcus’ protection. With no one to trust but each other, mutual attraction ignites into passion. But how far will Marcus go for vengeance when he learns the cult’s next victim is his son?

Can the woman who is free in her heart save the man who is a slave in his?

Dark Heart will be released on April 28 through Dragonblade Publishing.

“This is the place,” she said, more to herself than to Marcus who now stood behind her.

He leaned around her. She felt the heat of his body, exercised by the ride, as he pushed on the door.

“Open it,” he said brusquely to the unhappy Hadrianus who lingered at the top of the stairs.

The volume of the yell amplified in the stone stairwell. Kyna jumped at its suddenness and volume, and noted with satisfaction that Hadrianus did as well. The man ran down the stairs with more alacrity than she would have credited him.

“You’re sure?” Marcus asked, his voice now soft by her ear.

“Certain,” she said, her voice matching his. “Behind this door is a dormitory of some sort with a fireplace set into the wall. High windows let in plenty of light. There is a courtyard with raised gardens.”

Hadrianus returned with an iron key.

“This is one of our disused wings, Magistrate. I can’t imagine what interest it has for you,” he said, fussing at the lock.

The door swung open, the squeaking of the hinges reverberating around the room. Dust motes danced in the air lit by the angled shaft of light through the high windows.

The room was deserted. Worse still, it was empty. Only a small table by the fireplace showed there had ever been any habitation.

Kyna walked into the room stiffly, a somnambulist in a horrible waking nightmare as fiendishly real as the ones that plagued her in the villa.

The pallets were gone; so were the boys. She moved to the large shutters at one end of the room and pulled open a panel. There was the courtyard, its blood red geraniums in bloom.

She swung around and pointed a finger at Hadrianus. “They were here! Where are they?”

A flash of fear crossed the old doctor’s face as Kyna took another step toward him.

“I… I have no idea what you’re talking about. There’s no one here.”

Hadrianus turned to appeal to the magistrate.

“My lord, the woman is quite clearly disturbed. You can see for yourself no one is here – this room hasn’t been used in a long time – months, in fact.”