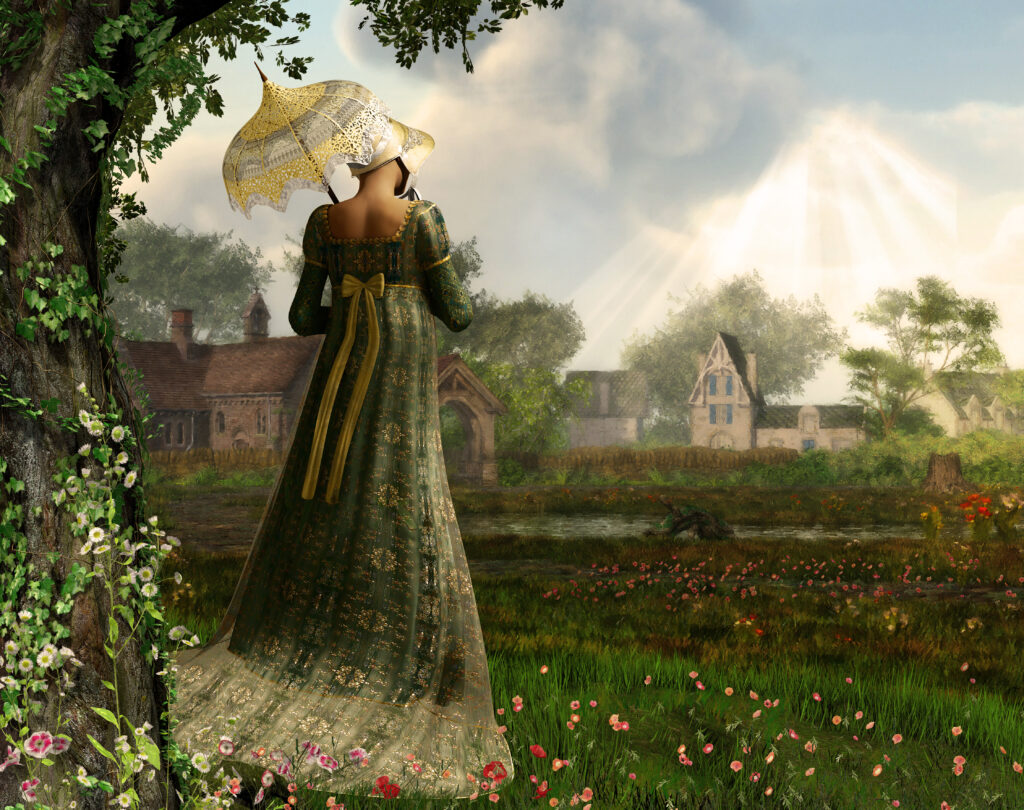 Expressly for The Teatime Tattler

The Teatime Tattler has just confirmed that Lady Alicia Hartley has arrived in Sommer-by-the-Sea and will be reading from her new novel, The Lost Dowry at Mrs. Miller’s Circulating Library. Many of us have long waited for this her fifth book. I must tell you some doubted Lady Alicia would travel to the village in the horrid winter weather, but also in light of her novels recent review posted in the London Gazette. It was a blatant attack on Lady Alicia’s writing expertise. You would think the acclaim (and sales) of the other novels in this series would indicate the prowess of this amazing author.

Who is the reviewer who tarnishes her reputation and then hides behind the name Anonymous.  To add insult to injury, this reviewer has the audacity to spend half the review comparing Lady Alicia’s work to another author.

This would all be just a literary issue, but I am here to tell you we must rally behind our girl. I have it from a very reliable source that Lady Alicia is not the only author who will be reading on at the circulating library. No, my dear friends. The other author mentioned in the review will be attending as well.

Will there be sparks? One can only hope. Mrs. Miller has scheduled the reading for Tuesday at 4:00. I, for one, will be there.

The Lady and Her Quill 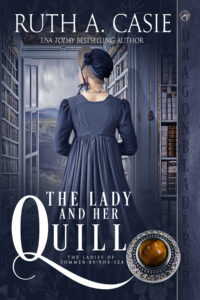 Her mind kept telling her to stop loving him, but her heart couldn’t let him go.

Renowned author Lady Alicia Hartley has lost her muse after a bad review. She blames it all on the author JC Melrose. A chance encounter with a handsome, witty Justin Caulfield has her heart racing, and her muse seemingly back. Is he her savior or her worst nightmare?

He didn’t see the turbulent ocean. He was too busy dealing with a different tempest.

The recently retired Captain Justin Caulfield is facing his own demons. As gifted author JC Melrose, his stories honor men who died at the hand of one man. His only focus is to avenge their deaths, that is, until he meets and falls in love with Lady Alicia.

The two authors take on a writing challenge based on a story of stolen gold taken from the newspaper headlines all to determine the better writer. While researching the story, Lady Alicia is captured by the thieves’ ringleader. Can Lady Alicia turn this mystery into an award-winning story? Can Justin save his real-life heroine? Can they both overcome their own challenges for a happily ever after?

Alicia looked at the women. They had all been close ever since they were Mrs. Bainbridge’s charges and remained that way long after graduating. This was the one place they were themselves without reproach or censure.

“Tea, if I may. Ladies, nothing pleases me more than your concern and friendship. My sister and her husband had to leave without me. I had work to do in London. When I was ready to leave, the weather stopped the passenger coaches, and I missed the mail coach. That is the reason for my unplanned sea voyage.” With her hands now warm, well, at least she was able to flex her fingers, she turned and faced them.

“That is all very distressing,” Anna said.

“I would be happy if that were all, but it’s obvious I also have an enemy.” She took the cup of tea from Mrs. Bainbridge and sat next to Pat who ate a small cake with butter icing.

“Enemy. What happened?” Her friends stopped with whatever they were fussing and were abuzz with questions.

Alicia removed a scrap of paper from her reticule and handed it to Anna. “Read it if you like. The last paragraph is most insulting.”

Anna read the article aloud. Alicia stared at nothing in particular. The words didn’t sound any better when someone else read them.

“This last paragraph isn’t terrible.” Anna handed the paper to Effie who wiped cake crumbs off her fingers on the linen before she took the scrap.

“Anonymous ended my review talking about another author.” Alicia swirled her spoon in her teacup tapping the sides in a frantic rhythmic beat.

Alicia stopped mid-stir. Removed the spoon. And put it to the side.

“You don’t take constructive criticism well,” Pat said picking crumbs off her plate and eating them. “That’s all this is. Your heroine was brave and her hero daring. The story was deeply romantic.”

“Pat.” Effie covered her friend’s hand with her own. “Ever since you met George everything to you is romantic.”

Pat smiled as Effie took another bit of cake. “Everything George does is…romantic.”

Alicia coughed, choking on her tea.

“Oh, my. Are you all right?” Pat asked, pounding Alicia on her back.

“Just taking a lesson from Alicia’s heroine.” The devilish glow in Pat’s eyes could not be missed. “I thought that dialogue was good when I read it. Is it plagiarism if you quote dialogue from a story?”

Alicia shook her head, a large smile on her face.

“Do you have any idea who wrote the review?” Mrs. Bainbridge asked.

“Not at all.” Alicia took another sip of tea. Her insides were warming.

“Is the reviewer possibly another author?” Hattie asked.

“I haven’t given it much thought.” Alicia stared at Hattie over her teacup.

Hattie took the article. She opened a wooden box that hung on the wall exposing a dart board and pinned the newspaper in the center. She removed three darts from their case.

“Your turn.” Hattie offered her the white darts, Alicia’s favorites. “I made sure the word ‘anonymous’ is in the center.”

Alicia put down her cup and took the darts, stood a good distance from the board and aimed. The dart board was a relic from the previous owner of the house. Mrs. Bainbridge encouraged her girls to take aim at their problems, literally and figuratively. If questioned about the dart board’s use, the appropriate response was the girls were building their hand-eye coordination.

Of course, she’d given thought to anonymous’ identity. She’d been thinking about who the critic was ever since she read the review.

She let loose her first dart. It hit the capital A in anonymous.

Excited to hand in her new manuscript to Caulfield, she hardly tasted her breakfast. There was enough time for her to deliver her story and be back in time to leave with her sister and family for the journey here. Everything was going well until she stepped inside Caulfield Publishing.

As soon as she walked into his office, she knew something was wrong. The man was not neat, but the disarray was beyond the pale. She noticed the review when she handed him the paper.

She took aim and let the second dart fly. This one landed on the next letter, n.

“Reviews like this are…not unusual. I’ve happily published your little stories. Keep in mind, you can’t please every reader.”

He wants to put off publishing her next book until the summer. Based on one review. One review. How could he?

She didn’t take time to aim the last dart. As fast as she lifted it, she let it loose. It nested with her other two. Alicia removed the darts, returned them to their case and closed the board, but not before she removed the article. Alicia handed the scrap of paper to Hattie.

“No, you keep it.” Hattie waved her away. “Put holes in his review just as you did in the paper it is printed on.”

She returned to her seat and took another sip of tea feeling much better.

Mr. Caulfield wasn’t at all pleased when she told him she had yet to decide if she was going to submit her next book to him. She should have told him then and there about the letter from William Lane.

She stayed in London for two days after Beatrice and Elkington left going through every word of The Lost Dowry trying to make sense of the reviewer’s comments. Her heroine didn’t have to be the only one to succeed. The hero could have been more… heroic. She stared off into the room.

What made her expect to succeed? Anonymous certainly didn’t think she should.

“Alicia, are you listening to me?” Effie asked.

“Obviously not. She’s off in her world planning another great adventure,” Anna said.

Alicia put her cup on the small table next to the chair.

“Have you read any of J. C. Melrose’s stories?”

The mere mention of the author’s name made her blood boil. To think her closest friend would suggest such a thing. Alicia got to her feet so fast she nearly knocked Effie over.

Effie grabbed her arm before Alicia walked away.

“No. Listen to me. You remember when Mr. Lindsay was teaching us about the Romans and why they were so successful?” Effie said with quiet yet determined firmness.

“Romans? What are you after? I could care less about the Romans at the moment.”

Alicia stared at her friend, waiting for her to finish her thought. How was this line of thinking relevant?

“Know your enemy,” Anna said from across the room.

“Precisely.” Effie’s face filled with triumph. “Why did this reviewer who was too much of a coward to take credit for his work, make the comment? The way you find out is by reading J. C. Melrose’s story.”

Effie’s idea was worthy. Alicia lowered herself back into her chair. More than worthy. 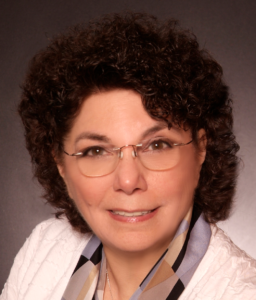 There was never a time when USA Today Bestseller, RUTH A. CASIE hasn’t had a story in her head. When she was little, she and her older sister would dress up and act out the ones Ruth created. Today, Ruth writes exciting and beautifully told legendary historical romances, medieval, Regency, time travel, and contemporary romantic suspense that are both rich and engaging. Her stories feature strong women and the men who deserve them, endearing flaws and all. Her stories are full of, ‘edge of your seat’ suspense, mind-boggling drama, and a forever-after romance.

She lives in New Jersey with her hero, three empty bedrooms and a growing number of incomplete counted cross-stitch projects. Before she found her voice, she was a speech therapist (pun intended), client liaison for a corrugated manufacturer, and vice president at an international bank where she was a vice president in a product/ marketing manager role, but her favorite job is the one she’s doing now—writing romance. Ruth hopes her stories become your favorite adventures.

Where You Can Find Ruth: