Some old acquaintance are better forgot 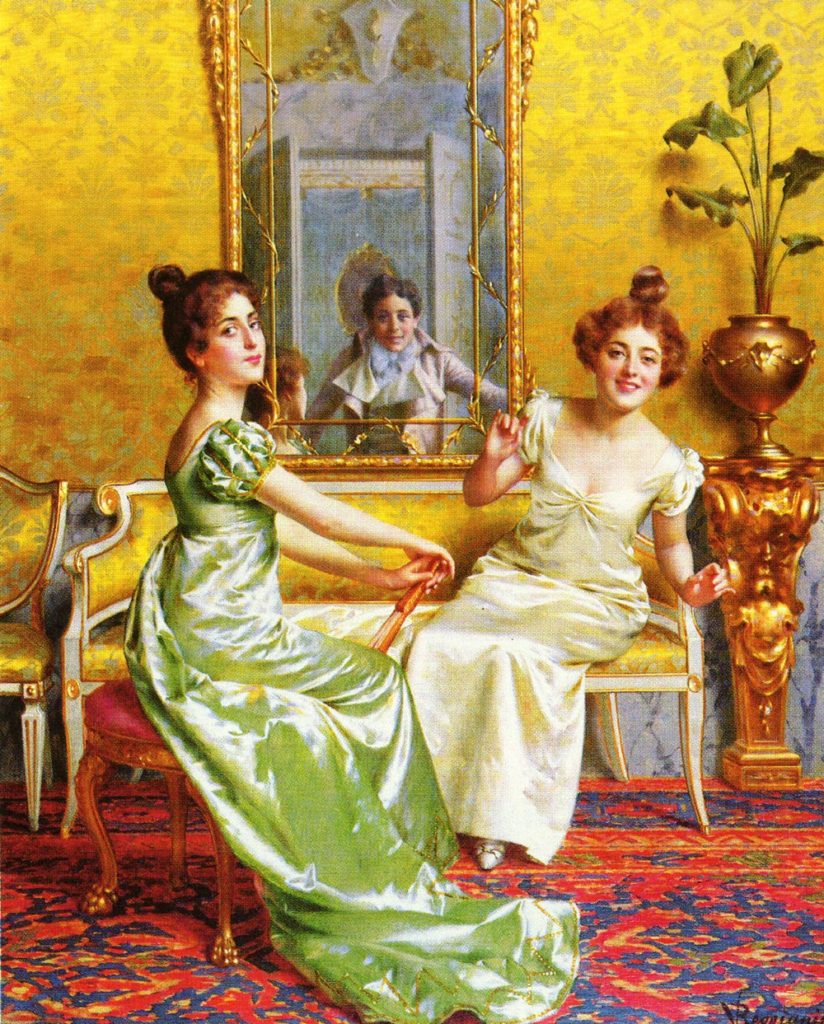 “Cici! Darling!” The tall lady in the fashionable dress turned at her name, and pasted on a smile as a willowy blonde in green hurried across the room to seize her hands and kiss in the vicinity of her cheek.

She returned the salute, the smile still not reaching her eyes. Lady Norton had retired to the country a year ago, perhaps because her husband was ill. And then, a few months ago, she was widowed; not an unexpected occurence with a groom some forty years her senior.

Apparently, she was back. “Vivi, I did not know you were out of mourning.”

Vivi waved at her gown, and laughed, the melodious tinkle that Cici had heard her practice every morning when they shared a room at the select ladies’ academy they had both attended. “As you see, my dear. And Guy says it will be perfectly acceptable for me to attend assemblies and the like, but not to dance.”

“You are staying with your brother?” Guy Kitteridge had been a suitor for Cecily’s hand. Thank goodness she had had the sense to select dear Thornley instead. And Thornley had chosen her instead of being distracted by Vivi’s obvious and openly proffered charms.

Girls were protected from the very knowledge that would keep them safe, but since her marriage she had learned that Kitteridge was vicious as well as rather stupid. Somewhat like his sister, in fact.

“With my aunt, though I have just come from meeting Guy. Cici, you will never guess who Guy and I ran into today. Candle Avery! Lord Avery, I suppose I should call him now, since his father died. Such a tragic accident. And his mother will never walk again, or so I hear.” She smiled, as if this news was particularly delightful. “I suppose it must be true, since he was at a business meeting with a designer of invalid chairs. He must be buying one for his mother, do you not suppose?”

“How sweet,” Cecily said. “He always was a very nice man.”

Vivi dismissed the comment. “I suppose. Odd-looking though. So tall and skinny, and his hair such a bright shade of red. No wonder his schoolfriends called him Candle!”

Not friends at all, from what Cecily had heard, but bullies led by Vivi’s own brother.

“Still,” Vivi was pursuing her own line of thought. “He is a viscount, and one can put up with a lot for a title. And he has inherited a fortune, as well, which is a thing I could do with, for Norton’s guardian is difficult about allowances.” She flicked impatiently at her gown, which was of the finest silk and bore the unmistakeable look of a London modiste. The new Lord Norton was in the custody of his much older cousin, who was known to heartily dislike his aunt-by-marriage. Cecily noted that Vivi’s only mention of her son so far was in relation to money for gowns.

“I could have had him three years ago, but he was poor then, and untitled,” Vivi continued. She nodded, decisively. “It is a good idea, I think.”

“Three years ago,” Cecily reminded the silly cat, “Candle Avery was courting Minerva Bradshaw. He wouldn’t have noticed you if you had appeared in his bed naked.”

Vivi laughed again. “Darling, a dead man would notice if I appeared in his bed naked, but so funny that you should mention little Minnie! Guess who Candle has hired to make his mother an invalid’s chair!”

Ah. Cecily had heard that the Bradshaw Carriage Makers, Minerva’s family business, also produced chairs for the many invalids of Bath. “The Bradshaws?” She said, since Vivi was clearly not going to go away until she had said whatever she had come to say.

“Close, darling, but not quite. Little Minnie herself! Not just from the shop, darling. She is an actual tradeswoman. How shocking, do you not think? Of course, Candle will never look at her now.”

Ah. Here came Thornley. Thank goodness. He smiled at his wife, and bowed coldly to Lady Norton. “You must excuse us, Lady Norton. My wife and I have an engagement.

Cecily took his arm and waved goodbye, hoping her relief was not apparent.

Though Thornley noticed, of course, saying once they were out in the road, “Really, my sweet widgeon, why do you talk to that fluff-headed she-cat? You do not even like her!”

“I haven’t talked to her in a year, Thornley,” she protested, but he informed her from his superior height that Lady Norton had been in the country for a year. “And I wish she had stayed there,” he added. “I tell you, Cecily, if you invite her to our house, I shall beat you.”

Cecily, who knew precisely the weight to put on such threats said, “You know that you will not, Thornley.”

“No, because I love you to distraction,” he agreed. “But really, my dear, will you not cut the connection? I know she was your friend at school, but I can do without being propositioned under the very eye of my own wife.”

Cecily pulled to a stop, tugging on his arm until he faced her. “She didn’t! She did!” She dropped his arm, and turned on her heel to march back down the hill.

“Wait!” Thornley caught up and stood in front of her. “It was a year ago, darling, and I had a word with her husband. That’s why he took her home to his country estate. Of course, then he died, but I thought she’d be out of circulation for at least another six months.”

“And when did you plan to tell me,” Cecily demanded.

“I didn’t. The barbarian in me delights in the idea of your scratching the nasty cat’s eyes out.” He heaved large sigh. “But I know you are too much of a lady to descend to her level. So it seemed pointless to upset you, especially when you were so fretf— so impatiently waiting for the arrival of our son.”

Cecily thought about this and decided the excuse could be accepted.

“Very well, Thornley, but do not think to keep such secrets from me again,” she said sternly. Her husband hung his head and did his best to look contrite, though his eyes twinkled so that she relented and told him, “And I will cut the connection.

Can a viscount and a carriage maker’s daughter find love? 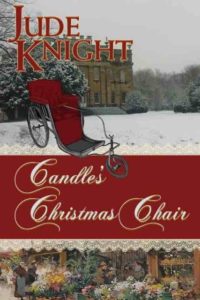 Randal Avery, known as Candle, comes to buy an invalid chair for his mother, and finds the woman who has been haunting his dreams for three years. He has until she finishes the chair for his mother to convince her to marry him. If he says it with flowers, will she understand?

Minerva Bradshaw, educated beyond her station, once dreamed of stepping into the fairy tale world of the ton, only to have her dreams crushed. Now the man she cannot forget is back, and he seems determined to raise those false hopes all over again. But she only has to resist until Christmas.

“Tha’ wants to talk to Min about they chairs,” said the man in the office, and directed Candle Avery to the far corner of the carriage-maker’s yard.

Candle strode through the light rain, dodging or leaping the worst of the mud and puddles. Min. Short for Benjamin, perhaps? Or Dominic?

No, he concluded, as his eyes adjusted to the light inside the shed. The delightful posterior presented to his eyes belonged to neither a Benjamin nor a Dominic. The overalls were masculine, but the curves they covered were not.

She was on a ladder, leaning so far into a bank of shelves that lined the wall opposite the door that her upper half was hidden, but he had no objection to the current view—said delightful posterior at his eye level and neatly outlined as she stretched, a pair of trim ankles showing between the tops of her sensible half boots and the hems of the overalls.

“Botheration.” Whatever she was reaching for up there, it was not obliging her by coming to her hand. Perhaps his lofty height might be of service?

There was a crash as she jerked upright at the sound of his voice, and hit her head on the shelf above. As she flinched backward from the collision, the ladder tipped sideways, spilling its occupant into Candle’s hastily outstretched arms.

The curves were everything he thought, and the face lived up to them. A Venus in miniature, black curls spilling from the kerchief that held them away from the heart-shaped face, that quintessentially English complexion known as peaches and cream, grey eyes fringed with dark lashes.

Grey eyes that had haunted his dreams for three long years, ever since she’d led him on at a house party for the amusement of her friends, and then left without saying goodbye.

Grey eyes that turned stormy as he held her a moment too long. He hastily set her down.

“Captain Avery. No, it is Lord Avery, now, is it not? My condolences on the death of your father.”

He bowed his acknowledgement, his mind racing. Bradshaw Carriages. He hadn’t made the connection. Had he known when he was courting her that she was a carriage-maker’s daughter? He didn’t remember anyone mentioning it.

But he did remember that her friends called her Minnie. Miss Minerva Bradshaw. Min.

Lord Avery was broader than she remembered. He’d been little more than a boy at that horrid house party, but even then the tallest man she had ever met. Isolated and nervous in that crowd of scheming cats who had only invited her to humiliate her, she’d believed him when he claimed to care. She’d been thrilled when he called her a little goddess, and asked for leave to worship her.

With him at her side, she’d braved the crush at the ball. Short as she was, she usually found such occasions overwhelming. People looked over her, bumped into her, ignored her. But Lord Avery—Captain Avery he’d been then—kept her safe. She’d even, for the first time in her life, been enjoying herself at a ball. Right up until she overheard his best friend talking to him, and it became clear that Lord Avery despised her common origins and was only courting her for her money.