Interview With Lieutenant Gilroy of the Royal Navy & an Apology

It has been six long months since we promised to bring you a companion piece to our Interview with a Pirate by interviewing a hero of the Royal Navy for contrastive purposes. However, His Majesty’s Navy insisted that the only officer they would permit us to interview is Lieutenant Brandon Gilroy recently returned from duty in the Caribbean. An unidentified source at the office of the First Lord of the Admiralty implied that the Lieutenant may receive a promotion for his bravery in a battle with the Pirate Irish Red (whom you may recall from the aforementioned Interview with a Pirate). While no doubt exists that Lt. Gilroy’s rewards for bravery are well deserved, it should come as no surprise given the close relationship between Viscount Melville—First Lord of the Admiralty for those of you who perhaps do not keep track of political appointees—and the Duke of Cowal. Melville and Cowal, it is well known, met as young men at the University of Edinburgh. Lt. Gilroy has been at sea until very recently, thus the delay in this promised interview.

INSERT BRANDON HEADSHOT: Tattler:  Lieutenant Gilroy it is an honor and a pleasure to meet you. 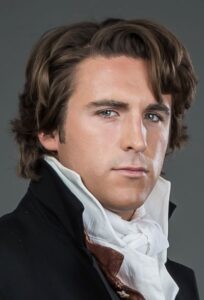 Lt. Gilroy: I have little time for pleasantries, Sir. Let us proceed with this nonsense. I must be on my way to Portsmouth within the hour.

Tattler: My apologies Lieutenant for any delay, but all England is eager to read of your exploits—especially your encounter with the infamous Irish Red.

Lt. Gilroy: What specifically would you like to know?

Tattler:  Let us begin by setting the scene for our readers. The battle between The Erie Mist (captained by Irish Red) and His Majesty’s Ship Hermoine (captained by the late Captain Lionel Guthrie) occurred somewhere off the coast of the Southern United States in August of this year. Is that correct?

Tattler: What can you tell us of the Erie Mist

Lt. Gilroy sighing heavily: The Erie Mist is a four masted Baltimore Clipper, built by Thomas Kemp. She carries a schooner rig and is one of the most nimble ships afloat. The mist is easily recognized by her distinctive colors. Her gunn’es are painted a very bright red. Her shamrock decorated figurehead bears and even brighter coat of green paint. Until the Hermione’s encounter with the Mist, we could only guess at her armament, which was rumored to include more than 16 12 pounder cannon and a variety of carronades. I can personally attest that the rumor is true.

Tattler, readers have patience with the technical details. We include them because we wish to report this interview in its entirety: Is the armament the reason the Erie Mist was able to overcome the Hermione?”

Lt. Gilroy: It helped, but that coward Irish Red struck from hiding. She so surprised us that Hermione received three full broadsides before it even had a chance to return fire. By then we were taking on so much water that Hermione could not be maneuvered and we ran aground on a sandbar. To the credit of our gunners, they did their best to strike a blow at the Erie Mist. However, by the time our guns were able to fire, the Mist had put on all sail and was bearing down on us so quickly that all Hermione’s shots missed. We were boarded before a second round could be completely loaded.

Tattler: From what you tell me, Irish Red is an impressive strategist and highly skilled sailor. Did you know she is a woman?

Lt. Gilroy: Not until after her crew boarded Hermione and defeated our crew in hand-to-hand fighting.

Tattler: We’ll return to the subject of Irish Red in a moment. You say her crew defeated yours in a close quarter battle. Everyone knows how well-trained British seamen are. How was it possible your crew was defeated?

Lt. Gilroy: Hermoine’s crew fought valiantly, but we were outnumbered by at least 2 to 1. In addition, I was too occupied in defending myself against two attackers when Captain Guthrie fell. Without the captain’s direction even the best crew will fail in such a fight. As soon as possible, I attempted to restore order and provide direction in the captain’s place. However, I could not gain the quarter deck, where I could be seen.

Tattler: Readers, the lieutenant is actually blushing. “Why were you unable to reach the quarter deck?” 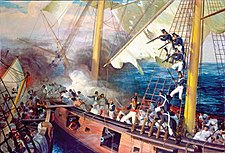 Lt. Gilroy: Irish Red herself, gained the high ground on that deck before I could get there. We fought on the ladder. I had nearly obtained the deck when my sword stroke, ah, tore open her shirt. She could have skewered me, I was so surprised to learn her gender. She should have skewered me. But she lost her temper. I could see the fury in those sea green eyes of hers. She drew her pistol and fired, missing my head by a hair’s breadth. That infuriated her further and she threw the pistol at me, striking me in the head. Unbalanced, I fell to the main deck where I lost consciousness. The crew surrendered, before I regained my senses.

Tattler: You must have been upset to be defeated and by a woman as well?

Lt. Gilroy: That, sir, is an understatement of the grandest proportions. 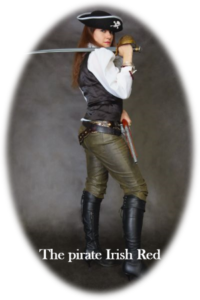 Tattler: It is unusual for ship’s captain to be a woman.

Lt. Gilroy: Unusual yes but not unheard of. However, history records more than nine women who distinguished themselves as ship’s Captains. Anne Bonny and Mary Read are prominent figures in that group.

Tattler: Interesting. That is almost word for word what Irish Red said when asked the same question almost six months ago.

Lt. Gilroy: You have spoken with that jade? Why did you not report her and have her arrested?

Tattler: We are a newspaper, sir, not representatives of Bow Street.

Lt. Gilroy: Balderdash. You have demonstrated the highest irresponsibility and disregard for the security of your nation and your fellow British citizens. You should be drawn and quartered for what amounts to treason.

Tattler: We have done nothing illegal and have conducted ourselves responsibly to our readership. (Readers, he is almost sneering.)

Lt. Gilroy: Do you know how many British sailors have lost their lives to Irish Red and her ilk? I should have you arrested for failing to take action to protect Britain. Nearly half the Hermione’s crew fell during the battle with the Erie Mist. Our Captain and several good officers are dead. All because your sensationalist rag could not do the right thing. I refuse to continue this interview and will suggest that the Admiralty never grant you another interview.

Readers, despite my protests, Lieutenant Gilroy left without saying another word. We deeply regret causing him any offense, but he offered no opportunity for us to apologize. We do so now in print. The Teatime Tattler sincerely regrets any offense offered to Lieutenant Gilroy, the Admiralty, and Britain. We will remind all that we have no control over the movements and actions of Irish Red and her crew. Indeed, had we attempted to have her arrested, it is likely that Britain would have less information on which to base strategic decisions than it has since our interview with a pirate. While the Tattler regrets the loss of any life, we cannot be held responsible for actions of previous interviewees after the date of their interview. Despite Lieutenant Gilroy’s threats, we hope our relationship with the Admiralty continues under fair winds and following seas. 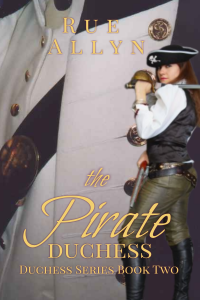 About The Pirate Duchess:  They met during a brawl.

Esmeralda Crobbin first encounters Brandon Gilroy during a street fight. Afterward, Esme admires the man’s skill with his fists, his intelligence, and a number of other attributes until she learns that he is a British Naval Officer. He would be eager to see her hang, if he knew she was the American privateer, Irish Red.

The Pirate Duchess will launch in early 2023, and is now available at a discounted price for Pre-Order at Amazon only.

About Rue Allyn:  Author of historical and contemporary romances, Rue Allyn fell in love with happily ever after the day she heard her first story. (She claims she was a precocious little brat who read at the age of two but could hear much earlier than that.) She studied literature for far too many years before discovering that writing stories was much more fun than writing about them. One of her greatest pleasures as an author is being able to read the story before anyone else. Rue is happily married to her sweetheart of many, many years. Insatiably curious, an avid reader and traveler, she loves to hear from readers about their favorite books and real-life adventures. Crazy Cat stories are especially welcome. You can contact her at Rue@RueAllyn.com. She can’t wait to hear from you.

News and Appeal for Aid from a Rival Publisher!