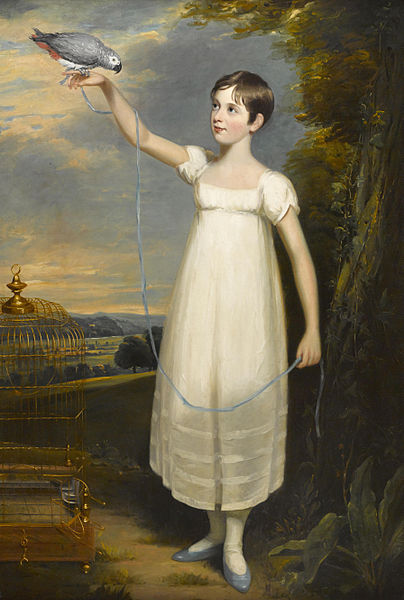 I do believe my darling grandson has lost his mind. I come to you, understanding that by addressing my desperation publically, I may make the gossip about him worse. But I need insights from your readers.

At six and thirty, he’s older than most bachelors should be. More attractive, too, dare I say, with a shock of bright blond hair and charming blue eyes. He’s wealthy with eleven thousand a year from estates, but independently situated because he is a hero of the recent campaigns abroad. Against Bony, my dear boy was a leader of men in our Army. For his service, he gained numerous awards and bonuses that allowed him to purchase a townhouse in Dudley Crescent. He’s lived an honorable life and at the recent demise of his older brother (who by the way never saw fit to open his purse to help him buy his kit!), he has inherited the earldom. He devotes himself to learning his new responsibilities and his tenants do praise him for his devotion. Their lot—shall I praise my boy inordinately?—has risen since his ascension to the title. He is so dear, so dedicated to those who rely upon him, that I fear for him in this new challenge he faces. Bless his soul, he deserves better than more turmoil in his life.

But I must get to the crux of his problem, mustn’t I?

A friend, a former comrade in arms, has recently passed this mortal coil. The man was a widower with a young daughter, age eight, in his sole care. At his demise, this gentleman wrote in his last will that he gave his daughter to the care of my grandson! The child is lovely, at first demure and well-mannered. But she arrived on my grandson’s doorstep with a dog and a parrot. Now mind you, canines are a special species. I keep quite a few hunters at my home in the country. But they sleep in the stables. Never in my home! And a parrot? Really. The creature talks like an inmate of Bedlam! But this, dear Tattler, is not the worst problem. Oh, no. 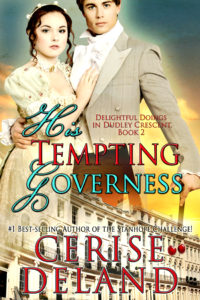 The child has moved in. She’s intelligent, but forward and will grow into a bluestocking, I wager. The dog seems well-mannered (and without too many fleas, I must add.) The bird, odd creature, irritates me because he (she?) imitates my greetings.

But the bigger problem is now the new governess. She is astonishingly beautiful with a heart-shaped face, green eyes the color of spring grass and a laugh so bright it would charm church bells. From what my grandson tells me, she has no previous employment as governess, but speaks French well and plays the piano like Brahms. He hired her within ten minutes of laying eyes upon her. But she disrupts his life with dancing in the upstairs hall and without invitation, moving pieces on his chessboard. Now he has her dining with him in the kitchen!

I fear, dear Tattler, she is there to lure my boy to the altar.  What should I say? What can I do to alert him to the possibility she will seduce him, marry him and ruin his reputation and his life? 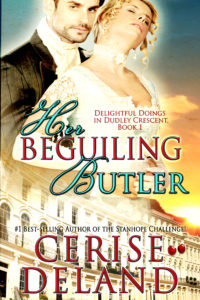 (This lady appears in the forthcoming tale, HIS TEMPTING GOVERNESS, Delightful Doings in Dudley Crescent, Book 2, by Cerise DeLand. The first book in the series is currently available everywhere, HER BEGUILING BUTLER!

Does her husband know?