I have the distinction of attending a most exclusive house party at Clarion Hall in Ashmead, hosted by the Earl of Clarion with his sister, Mrs. Morgan—she who was once Duchess of Glenmoor—serving as hostess. Much of London vied for invitations, and ours was obtained only by dint of my longstanding friendship with none other than the Marchioness of Danbury, patron of the event. The usual 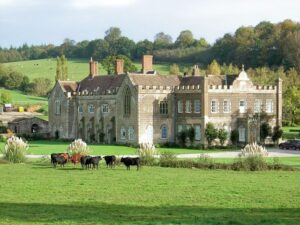 entertainments have been on offer but I quickly realized that all of this forced conviviality is in the service of politics, of all provoking and boring things. I note the attendance of the Home Secretary himself along with his closest cronies including the Duke of Awbury. I personally have always found Awbury a bit too high in the, well, instep, for my comfort. The man believes himself superior to most mortals except perhaps the Prince of Wales, and he disapproves of Prinny, too. It is all most disappointing, but I digress.

What is most interesting to your dear readers, of course, is the question of the earl’s marital aspirations. For weeks the most frequent on-dit in London would have it that, while the excessively proper earl had finally bent sufficiently to host his peers, he had no intention of looking for a wife, being content to mourn his first spouse dead these six years. Families with daughters to puff off, for the most part, stayed away. 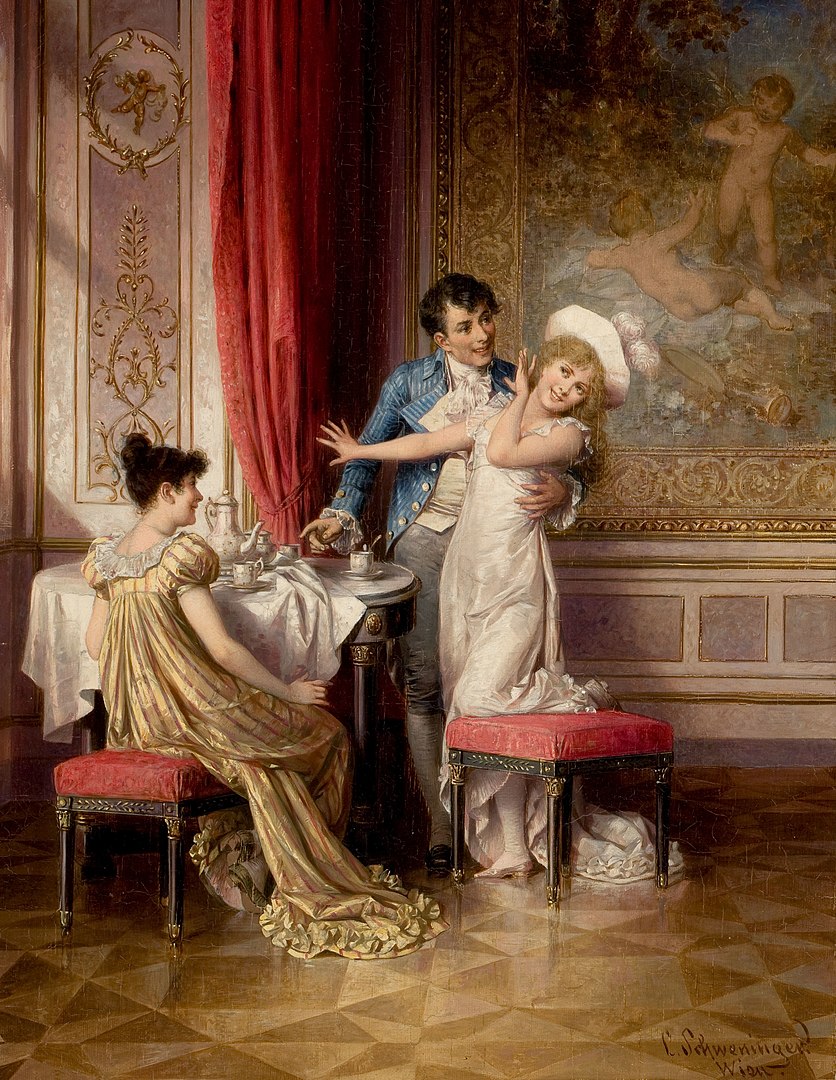 You may understand, then, dear Sir, why I am aflutter with excitement. One could ignore the handful of persistent mamas who inserted ambitious daughters into the party. An unattached earl—particularly one as attractive (dare I say it?) as the earl—is a marital prize they cannot ignore. One can hardly blame them, but one can ignore them. I say that because it quickly became clear that Mrs. Morgan had marshaled the ladies of the family–regrettably not all of them legitimate members—to depress those ambitions. No amount of sprained ankles, lost wandering into the bachelor bedrooms, rearranged seating charts, or manipulated teams for games escaped the vigilance of the earl’s female relatives. I was ready to believe that he actually was not in search of a wife. Almost.

The arrival of Lady Estelle Wilton in the company of her grandparents, the Marquess and Marchioness of Wilbury, was an entirely different thing. A perfect lady, she has resorted to none of the shenanigans the other hoydens have attempted and yet, she has monopolized much of the earl’s attention. A man as reserved and proper as the upright earl would certainly seek such refinement in a wife. A man with political ambition would no doubt seek one with a pedigree as illustrious as that of Lady Estelle who would without doubt make a superior political hostess. As if all that weren’t transparent enough, my maid confided that a footmen told those assembled in the servants hall that the two of them rode out today with only his nominal company. Furthermore, they rode to Willowbrook, the earl’s former home and spent over an hour inside—sans footman or other chaperone.

In short, it appears we anticipate a happy announcement. I write now so that you may have the news first, and get the jump on your competition. You may coyly print:

Has a certain house party in the midlands brought marital aspirations to the Earl of C__? A certain Lady E__ W__ appears to have won the race to capture his attention. We expect wedding bells soon.

I have no doubt you will be merely reporting the truth, though of course you will protect the lady’s name. There has, alas, also been some foolish gossip about Lady Delia Fitzwallace, Awbury’s former daughter-in-law. If she weren’t a widow and a matron one might call her a hoyden as well. She lacks the refinement one would expect in an earl’s bride. Awbury himself is quite critical of her easy ways. Her looks are too coarse for a countess—her skin and hair reflect an island heritage—even as her manners show her family origins in trade. No, she would not do at all, and the earl can be relied on to know it. I’m sure of it.

The final book in Caroline Warfield’s beloved Ashmead Heirs series is available at preorder pricing (only 99 cents) today. It reverts to retail after launch on June 28.
https://www.amazon.com/gp/product/B0B4FCXDX2/
The notorious will left David, the very proper Earl of Clarion, with a crippled estate and dependents. He’s the one left to pick up the pieces while caring for others—his children, his tenants, and the people of Ashmead. He cares for England, too. Now that the estate has been put to right, he is free to pursue his political ambitions. But loneliness weighs him down. Then he meets his new neighbor. When his family plans a house party to launch his political ambitions, nothing goes quite as he planned.
Her uninhibited behavior shocks him. Why can’t he get her out of his mind?
Happily widowed Lady Delia Fitzwallace revels in her newly rented cottage, surrounded by flowers and the wonder of nature, thrilled to free her three rambunctious children from the city of Bristol and let them enjoy the countryside to the fullest. If only she can avoid offending her very proper neighbor, the earl, when their children keep pulling her into scrapes.
She is not what he needs in a countess. Can she help him find a proper political wife? 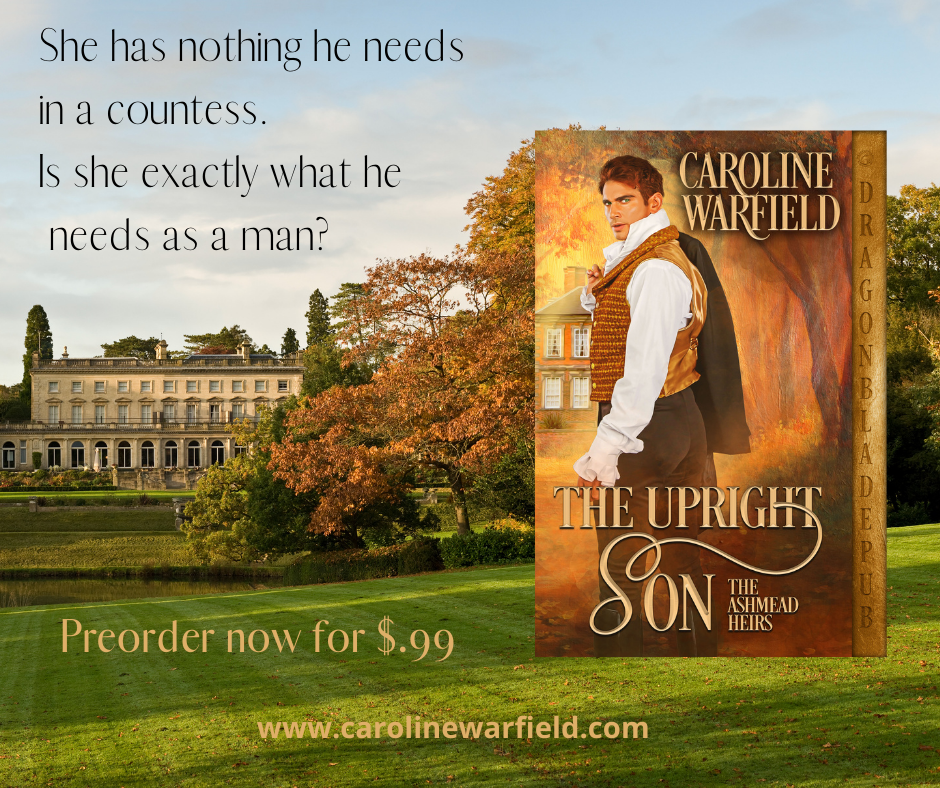 Special to the Teatime Tattler from Eunice Norton and the Monday Tea Circle of Ashmead on Afan.

We gathered as is our habit on Monday afternoon to review the news of the week here in the valley, and ran so far over our time that Bessy Grigg’s husband took umbrage at the delay in his supper. We had much to discuss.

The Benson family put up an entertainment for all and sundry at the Assembly Rooms on Saturday evening to celebrate old Robert’s sixtieth birthday. There were many who thought that appropriate, him being a fixture in the village, but some of us questioned use of the large room over the village offices for a family party, that space having run to shabby and disrepair in recent years, and the Benson family being in possession of a inn with a perfectly fine dining room, but Emma Corbin—she as was Emma Benson—insisted.

Most of us admitted she did the rooms justice. New paint. Waxed floors. Clean windows. Flowers sprucing it up, and greenery too for all it is summer and not Christmas. She even got that Welsh colonel staying at the inn—him who is some engineer they say—to repair the musicians gallery so it was safe to use. They brought some group of players down from Nottingham, too, for the dancing.

As you may expect every man and woman in Ashmead came, and the tenant farmers from round about as well. Some seemed to find children appropriate, notably the Corbins, but most of us don’t approve of little ones where there is drink and dancing. A bigger surprise was the arrival of the Duchess of Glenmoor, Lady Madelyn Caulfield that was. She rarely socializes with common folk and keeps to herself since the old duke she married died.

Of course, most folk came for a glimpse of Wee Robbie Benson himself, the innkeepers wild son gone these many years. Went off to war and came back a baronet. Emma Corbin claims he was a hero at Waterloo, too. Now he’s come to take ownership of Willowbrook, left to him by the old earl. Most folks claim they always knew he was the earl’s get. You only had to look at him to know, but don’t tell old Robert the innkeeper that. Took him as his own and won’t hear otherwise.

The biggest news was the arrival of the Earl of Clarion himself late into the evening. Come up from London straight to the assembly, though no one knows whether it was the only reason he came. Walked in proud as a lord—which of course he is—walked up and congratulated old Robert as bold as you please as if the innkeeper was a peer when everyone knows he started life as a footman at the Hall.

Then Wee Robbie came from the corner he’d been lurking in. When he stood next to the earl and the duchess stood to join them, you could hear a pin drop. Same eyes. Same hair. Same tall frame (though Robbies is a bit, er, sturdier than the earl.) Same proud tilt to the head. Folks in London ought to be aware that the man they know as Sir Robert Benson is naught but an innkeeper’s charity case and the Earl of Clarion’s bastard brother. No question about it. Don’t know what was said, but Sir Robert left right after.

The earl stayed. He even led Emma Corbin out, and she looked like she was going to burst. Then the duchess danced with that Welsh colonel. It was certainly a night to remember.

When the Earl of Clarion leaves a will with bequests for all his children, legitimate and not, listing each and their mothers by name, he complicates the lives of many in the village of Ashmead.

One sleepy village. One scandalous will. Four beleaguered heirs.

One is The Wayward Son.

Rob Benson returns to Ashmead reluctantly, determined to stay briefly. He never expects a shocking bequest and a termagant with flashing eyes—and a musket—to bind him to the place. Lucy Whitaker wants what she can’t have, Willowbrook. If she must turn it over to the heir, she can at least make sure he loves it and its people like she does.  His life is London; hers is Ashmead. How can they forge something lasting when they are torn in two directions?

Watch for the duchess and the colonel in The Defiant Daughter in October.

Caroline Warfield, proud Bluestocking Belle, has been many things: traveler, librarian, poet, raiser of children, bird watcher, Internet and Web services manager, conference speaker, indexer, tech writer, genealogist—even a nun. She reckons she is on at least her third act, happily working in an office surrounded by windows where she lets her characters lead her to adventures in England and the far-flung corners of the British Empire. She nudges them to explore the riskiest territory of all, the human heart.