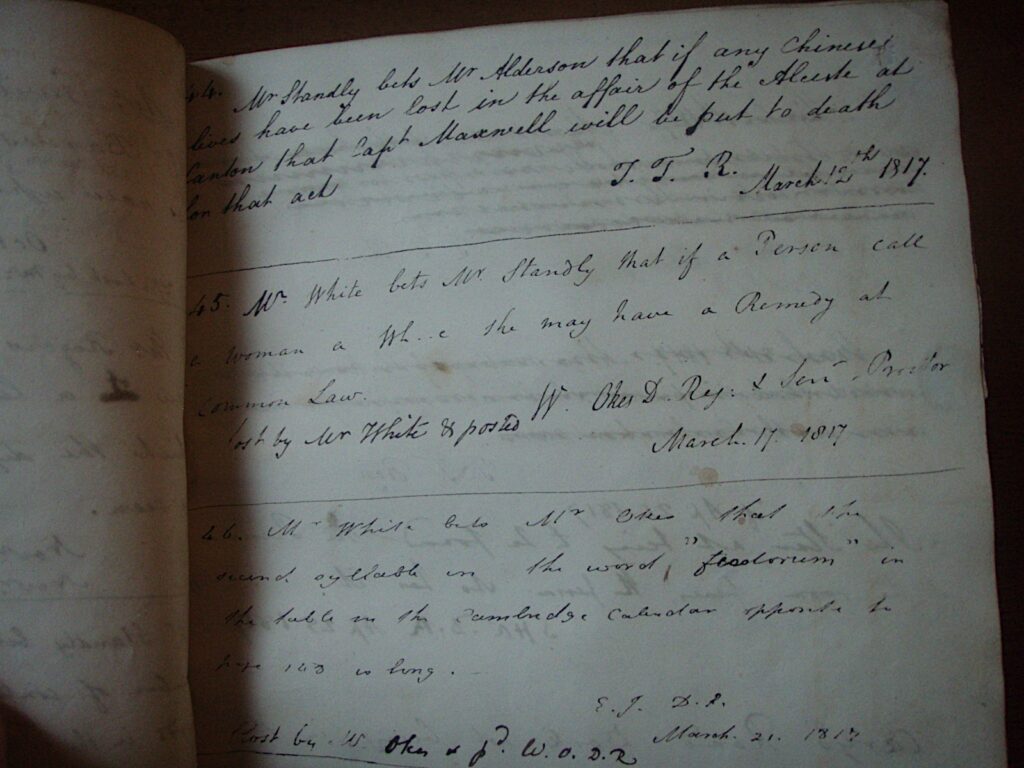 Who is the greatest matchmaker of the ton? Lady O. has laid claim to the title, and her cousin Lady S. has challenged her to prove it. Which of them first spoke of this private wager–and the prized family possession that will belong to the winner? We cannot know, but we do know that, since the beginning of the year, all of Society has been abuzz with news from houseparties where Lady O. has been bringing together the the notoriously unmarriageable.

So far, the results have been astounding. People who have sworn off marriage have tied the knot, those who don’t believe in love have fallen to Cupid’s arrow, rogues have reformed, parlour games and contests of skill have turned into games of love.

With seven months to go, the betting is running hot in clubs, salons, drawing rooms, and coffee shops; in high and low places. Can Lady O.’s run of luck continue? Or will even her matchmaking eye fail her, giving the game–and the prize–to her cousin? 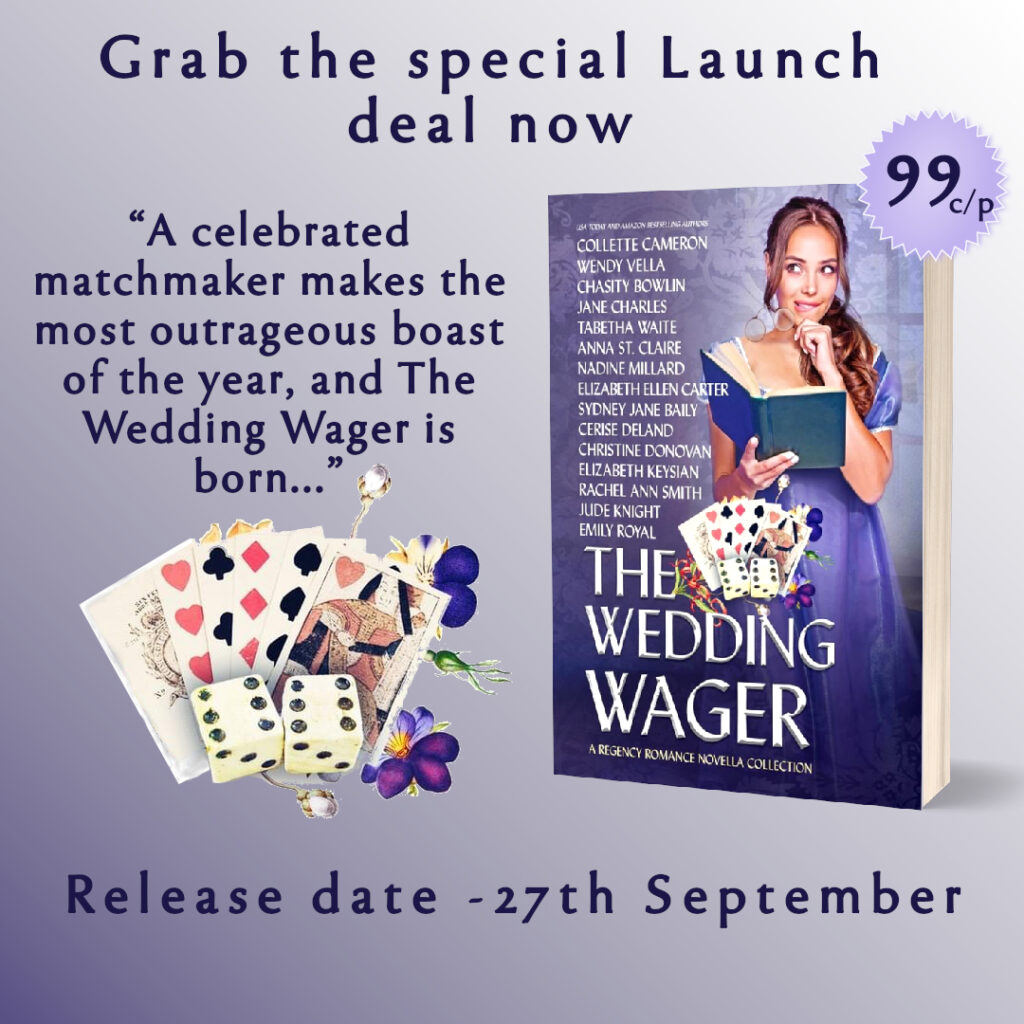 Will you be my Valentine?

Maudy Braxton sidled into the ballroom behind Miss Waterson, the subscription secretary, and two of the senior maids. She had been maid-of-all-work at the Upper Assembly Rooms in Bath for all of three days, and she had already learnt not to attract the attention of Mr. Fowler, the manager.

He was there up the front, smarmy toad, but so was another man – a fine-looking gentleman, elegantly dressed in pantaloons and neatly fitted jacket, with an embroidered waistcoat that she regarded with the eye of a connoisseur.

Such fine work had been her ambition when she worked for Mrs Primm. She was employed to sweep the floors under the cutting tables and to fetch and carry the threads and fabric needed by the artists Mrs Primm employed in her workroom. She had been promised lessons in creating the blossoms and scrolls that decorated the skirts of the gowns intended for fashionable ladies. Borders and ornate waistcoats such as this – the work of those at the top of the trade – had been a distant dream.

She nudged Annie, the maid who had been so kind at showing her how things were done here, and whispered, “who is that with Mr Fowler?”

“That’s Mr King himself; that’s who that is.”

The Master of Ceremonies? What a magnificent gentleman. And what did he require of all the staff of the upper assembly rooms?

“Quiet, there.” Mr Randal, the senior footman, spoke sternly but with a small smile playing in the corners of his lips. Mr Randall was ever so kind. Tall and handsome too, though handsome is as handsome does, Granny always said. Granny would have approved of Mr Randal.

Mr King cleared his throat. “You may be wondering why Mr Fowler asked you all together. I wanted to tell you myself that the committee has approved a Valentine’s Day ball. This will be held on a Tuesday night, not one of our usual assembly nights, but I am sure you will all work with me to make it a success.

“I realise it will involve extra work both in the preparation and on the night itself. I have authorised Mr Fowler to meet the costs of employing you for the extra hours required. I intend this to be an event to remember; the highlight of the 1815 Bath Season. Now, does anyone have questions?”

Miss Waterson raised her hand. “Mr King, will this event be covered by the usual subscription, or will it require a separate ticket?”

“An excellent question.” Mr King inclined his head to the lady, recognising her superior status to most of the Upper Room’s other servants. “The ladies and gentlemen of Bath will purchase tickets to this Ball. I have suggested to Mr Fowler that, in addition to advertisements in the Bath Chronicle and notices in the pump rooms and other places where Society gathers, we send out personal invitations to each of our members and to other prominent residents. I imagine I can leave this in your capable hands, Miss Waterson.”

After several other questions, the servants were dismissed and scattered to their work, most of them fervently discussing the coming event.

“I did not expect all this extra work,” Miss Waterson was complaining to Mr Fowler. “My sister has been begging me to give up this work and come and be her companion.”

Maudy left with Annie, but they separated off, Annie to tidy the card room, and Maudy to fetch a bucket and mop from the supply cupboard behind the anti-chamber. The floor in the card room awaited her attention.

She found the buckets easily enough, but as she looked around for the mops, Mr Fowler entered the covered, closing the door behind him.

Maudy backed up a step, which was as far as she could go. “Good, thank you, sir.” Her voice trembled. She clutched the bucket more tightly, and wondered how long her employment would last if she hit Mr Fowler with it. Her job with Mrs Primm had not survived her resistance to a man who mistook her for a seamstress, and mistook seamstresses for loose women.

As if he could read her thoughts, Mr Fowler purred, “I hear your last job was as a seamstress. Perhaps you’d like to show me a fine — uh herm — seam?”

Mr Fowler put out a hand to fondle her cheek just as the door opened behind him. He dropped his hand. Harold Randal took in the scene in a single glance.

“Is that door swinging was shut again? We should get the carpenter to look at it, sir.” He held out a hand for Maudy. “Come along, girl. That card room won’t clean itself.”

Maudy followed him gratefully, wondering how to explain the scene he had witnessed. She didn’t need to. As soon as they were out of earshot of Mr Fowler, Mr Randal said, “I should have warned you, Miss Braxton. I tell all the girls. Always work in pairs. Never be alone with Mr Fowler.”

Annie was waiting in the card room, already armed with bucket and mop. Mr Randal left them to their work and the friendly conversation that helped pass the time. “If you was a lady,” Annie said after a while, “which gentleman would you choose to dance with at the Valentine’s Day Ball?”

Maudy said she didn’t know any gentleman. Mrs Primm had said the man who tried to assault her was no gentleman. Annie knew several, having taken their cloaks and coats on many an occasion here at the assembly rooms. She was happy to chatter on, comparing their features and deficits.

Maudy listened with half an ear. In her own mind, she was dressed in one of Mrs Primm’s finest ball gowns, and was dancing in the arms of a gentleman who bore a stunning resemblance to Mr Harold Randal.

Join the Bluestocking Belles for five original stories set at and around the Valentine’s Day Ball. On preorder now, and published 9 February.

For blurb (including the individual blurbs for each story) and buy links, see our project page.