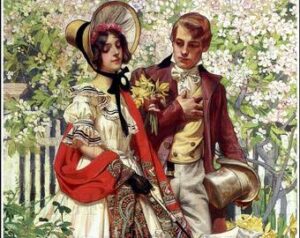 The fated couple in happier times.

It has come to our attention that some weeks ago a woman arrived at MacShennan Ruith–The ancestral home of the Duke of Cowal–claiming to be the child of the current Duke’s youngest daughter.

You may recall that daughter, Lady Mary Katherine MacShennan, vanished after highly respectable Lord Gordon James Sutherland broke their engagement. The grounds for breaking the engagement were scandalous in themselves. According to Sutherland, and other sources close to the Duke of Cowal, Lady Mary Katherine, while legally the duke’s daughter was actually the issue of an unnamed scion of Clan MacTavish. The source of the truth about Lady Mary Katherine’s actual parentage is said to be the Duke of Cowal himself. While we can respect the impulse to honesty which rumor says motivated the duke, we must wonder if His Grace perhaps suffered a mental aberration that caused him to confess the truth before the couple had been married. Had he waited, the scandal might never have come to light, and Lady Mary Katherine might never have vanished. Yes, vanished. Nothing has been heard of the lady since the announcement by Sutherland that he could not in good conscience wed a person of questionably birth.

There is much to be wondered at in this sad tale, for in addition to the lady’s disappearance, the Duke suffered a severe decline in health, and rumor reports that Laird MacTavish went on a drunken tear that lasted more than six months and put that clan into severely straightened circumstances. Add to these curious events the fact that Clans MacTavish and MacShennan have feuded with each other off and on since before Robert the Bruce was King of Scotland. Two noble houses at odds for so many centuries does rouse questions as to whether or not foul play might have been involved at any point.

Regardless of such possibilities, all might have faded into obscurity had it not been 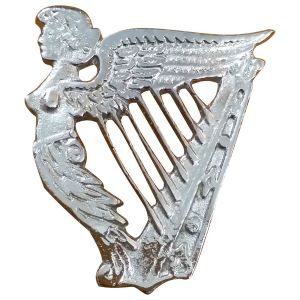 for the mysterious Miss E. C. who arrived at MacShennan Ruith ‘in search of the truth about her parentage.’ She would not be the first such pretender. However, unlike previous imposters, Miss E. C. has been welcomed into the fold by no other than His Grace of Cowal himself. Even stranger is the reported improvement in the aging duke’s health. This reporter can only hope that the duke is not over exerting out of a wish to appease his fatherly sorrows.

What will become of the duke, Miss E. C., and the two battling clans, we can only speculate. Fear not, we will report in this column the moment news becomes available.

About this article: The characters mentioned in this article are all present in some way in my current WIP, The Pirate Duchess, which I hope will release sometime in the last half of 2022. If you would like to know more about the ‘mysterious Miss E. C.’ she is the heroine of both The Pirate Duchess and my novella, Wait for Me, which appeared in The Bluestocking Belles and Friends collection, Storm & Shelter. You may find your copy of Storm & Shelter at Amazon or your favorite book retailer.

About the Author: Rue Allyn is the author of historical and contemporary romances. She says of herself, “I fell in love with happily ever after the day I heard my first story. (Yes, I was a precocious little brat who read at the age of two, but I could hear much earlier than that.) I studied literature for far too many years before discovering that writing stories was much more fun than writing about them. Heck, as an author, I get to read the story before anyone else. I am happily married to my sweetheart of many, many years. Insatiably curious, an avid reader and traveler I love to hear from readers about your favorite books and real-life adventures. Crazy Cat stories are especially welcome. You can send me your words of wisdom . . . Don’t shake your head at me; all words are wise in one context or another. You can trust me on this; I’m an author. As I was saying, you can send your words of wisdom, humor, and friendship to me at Rue@RueAllyn.com. Can’t wait to hear from you.”

Keep up with Rue Allyn by subscribing to her newsletter and get a free novella download when you do.