Could a Woman Be Elusive Scholar B. Biggs? 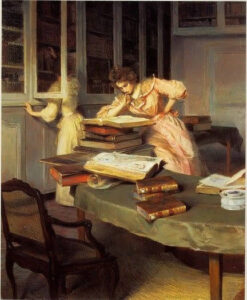 You have probably heard the talk regarding that mysterious scholar, B. Biggs. Just in case you have not, the on dit has it that there is no record of any B. Biggs attending at any of the respectable schools or universities in England nor in Scotland. We all recognize that attendance at one of our respected institutions of learning is not a requirement for a keen and educated mind. However, this reporter has learned something previously unknown about the shadowy Biggs.

Starbrook is a typical village with little worthy of note to the traveler. A quick perusal of the town and some conversation with local patrons of a few taverns, revealed not only that Starbrook is not home to any scholarly or educational institutions but also that the village’s only claim to renown is that it sits within the borders of the ancestral lands of the Earl of Seahaven.

The ninth earl recently passed away–I’m certain you read of his obsequies here–and the tenth Earl has been installed. I have not had the pleasure of meeting the current Earl. However, I have not heard that he has a reputation for incisive scholarship of any kind, let alone the distinguished papers on Egypt that originate in the mind of B. Biggs. It is possible that the earl plays the dullard in society in order to prevent anyone from guessing that his is the hand which pens the Biggs papers. This reporter is of the opinion that it is not the earl but one of his connections, possibly even one of the ten daughters of the previous earl. Disappointingly, the local folk had little to say about the ninth Earl’s family. Thus, despite my best efforts, I have been unable to identify the true mind behind B. Biggs’s scholarship.

Rest assured dear readers that my inquiries will continue, and I hope to have more specific news at a date in the not-too-distant future.

I remain ever your loyal reporter dedicated to bringing you the truth–no matter how scandalous.

Where is the Gossip?

Matchmaking and Secrets in Falmouth