Conversation Heard on the Street

Well, you asked if there’s anything interesting going on in our little town of Lobster Cove, so I’ll just share a tidbit I heard the other day. I don’t normally gossip. You know me—Bertha Mayer’s a respectable woman. But I don’t feel I have the right to keep something so scandalous to myself.

It’s about that Lisbeth O’Shea—widowed barely a year, her husband lost at sea and his body never found. There was plenty of talk about him before he died. Said he took up with other women including that barmaid over at the Hogshead, the one who already has an illegitimate son. But I always thought Lisbeth a respectable woman. A respectable widow, if you know what I mean. Now she’s gone and given widowhood a bad name.

What’s she done? Only moved in with that handsome blacksmith, Rab Sinclair—the one with the thick Scottish accent and those fine blue eyes—moved right into his bachelor quarters behind the forge, she has. Shameless! Such things just aren’t done in our quiet town. Of course, Rab claims he hasn’t been staying there nights. He says he’s been sleeping down the street at the livery stable. As if anyone believes that.

You know, half the women in Lobster Cove have been chasing him for years but he’s barely looked at any of them. Makes me wonder now. Did Rab have an eye for Lisbeth even back when her husband was still alive? Just what did happen to Declan O’Shea anyhow, when his boat wrecked? People do funny things, especially when the heart’s involved.

But I have to say, just between you and me…if a woman, even a respectable widow, were to throw caution to the winds it just might be for the sake of a man like Rab Sinclair. Now, promise you won’t repeat that to anyone! 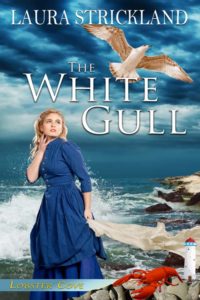 When the trawler White Gull was lost in a storm off the coast of Lobster Cove, Lisbeth O’Shea’s husband, Declan, was lost along with it. At least that’s what Lisbeth believes until, a year later, she hears Declan’s voice in the night and sees him haunting the shore near their tiny cottage. Then she wonders… Has grief affected her mind? Or is someone playing a cruel trick?

Town blacksmith Rab Sinclair has loved Lisbeth ever since he arrived in Lobster Cove. Lisbeth has never had eyes for anyone other than the charming, feckless Declan O’Shea, but Rab knows Declan was not faithful to Lisbeth. How can he convince the grieving widow she’s pinned her heart on the wrong man? And when dangerous secrets come to light, how can Rab protect the woman who means more to him than his own life?

Lightning flashed once more, flooding her eyes with brightness. In the doorway of the bedroom stood a figure wearing dripping oilskins with only the sou’wester missing from his bare head.

In the sudden darkness that followed the lightning she moaned his name and then shouted it.

“Declan? Declan, Declan!” She heard movement, the scrape of a boot on the floorboards, the flap of his coat as he turned and left the doorway. With a sob, she followed. Hands stretched before her like a blind woman, she felt for him, stubbed her bare toe on the leg of the bedstead and faltered. She blundered from the room in his wake.

The cottage boasted but three rooms: this bedroom they had shared, another smaller bedroom she’d dreamed of someday using as a nursery for her children and the main room which combined parlor and kitchen. The darkness of the main room enfolded Lisbeth like black velvet. She had but a glimpse of paler darkness as the front door opened and closed again.

She followed after him, her heart torn between gladness and pain. He was here! But if he truly were here, returned by some miracle from the same sea that had stolen him, why would he go from her? She reached the door, tore it open and stared out into the storm. Waves and salt spray poured over the stones in front of the cottage. Static filled the air and lightning arced overhead, the thunder competing for dominance with the crash of the rain. Wearing only her nightgown, Lisbeth was immediately soaked to the skin. The wind tore at her hair as she strained to catch sight of the figure she had glimpsed in the doorway.

From the cottage, as well she knew, a path led either north to a narrow strip of shingle or south towards Lobster Cove. Which way might he have gone? She could see nothing but storm, the raging elements that matched the furor now in her heart. Would he head down to the sea? Most this coast consisted of sheer rock but the O’Sheas possessed that stony beach where they had hauled up their boats and readied their lobster traps.

The boats were all gone; the White Gull lay in pieces. Why would Declan go there? Having come home to her, why would he leave at all?

She walked barefoot to a break in the rocks where the sea poured in like a gray beast, alive and wild. No one but a madman would be down on that strip of shingle now.

She turned her head toward the track but saw nothing. The thought came to her: maybe I imagined it. But she had heard the scrape of his boots on the floor. She had seen his hair ruffled by the force of the storm.

A dream, then. She’d had them before, yes, but never, never so real. She returned to the cottage where she shut the door and hurried to the fireplace. With clumsy hands, she searched for matches and the stub of a candle. Her fingers shook so violently it took her three attempts to put flame to the wick.

The light took hold slowly and seemed pitifully inadequate. Thrusting it aloft, Lisbeth retraced her steps to the door of her room, careful to keep her now-sodden garments swept back, her eyes on the floor.

A trail of wet led its way to the bedroom door and culminated on the threshold.

The very place where he had stood.

The candle tumbled from her suddenly numb fingers and the flame went out.

Award-winning author Laura Strickland delights in time traveling to the past and searching out settings for her books, be they Historical Romance, Steampunk or something in between. Born and raised in Western New York, she’s pursued lifelong interests in lore, legend, magic and music, all reflected in her writing. Though she’s made pilgrimages to both Newfoundland and Scotland in the company of her daughter, she’s usually happiest at home not far from Lake Ontario with her husband and her “fur” child, a rescue dog.

The Rose, No More? Send Word From Southwark