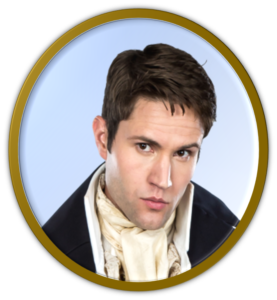 Readers, The Teatime Tattler has unearthed serious questions about the recent passing of Mr. Gervase Hastings, cousin by marriage to Lady Enid MacShennan, widowed daughter-in-law to His Grace, the Duke of Cowal. The announcement was made two Mondays past, that Mr. Hastings passed away suddenly after an accident at the Duke’s Scottish seat MacShennan Ruith. No details were given in the announcement.

That in and of itself is unsurprising for a well connected yet impecunious gentleman such as Mr. Hastings. However disturbing rumors have arisen that the circumstances of Mr. Hastings’ passing might not be as simple as the lack of detail makes them appear.

First, and most peculiar, Hastings’ funeral service and burial occurred within a day of his death. This short amount of time is only noteworthy, if one accepts that in chilly Scotland a three day lying in repose is the norm. In addition, the interment occurred at night, a privilege usually reserved for noblemen of high degree and wealth (due to the cost of lights to guide the procession and extra fees due to the clergy). 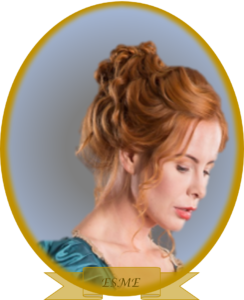 Next, we sent our reporter to the ducal seat, and she discovered not all in residence were content with the story of an accidental death caused, it was presumed, by intoxication. Upon arrival, our reporter learned the laundresses of MacShennan Ruith were occupied in removing bloodstains from a carpet, which formerly occupied space on the floor in the chambers of Miss E. Crobbin, a guest of the Duke. No one would confirm that the blood belonged to Mr. Hastings, or that he died in Miss Crobbin’s chambers. However, several servants related seeing Miss Crobbin in heated discussions with Mr. Hastings. One employee recalled a picnic attended by all the guests at which Miss Crobbin—perhaps unwisely, or perhaps with intent—went apart from the company and was followed within moments by Mr. Hastings. Even more disturbing, the guests and their hosts, save for the duke’s heir, Viscount Cairndow, departed the site before Miss Crobbin and Mr. Hastings returned. Miss Crobbin did eventually return late in the afternoon. The Viscount followed within an hour. Hastings was not seen until the next day and it is not known when he returned.

Last our reported learned that the evening on which Mr. Hasting’s purported accident occurred, the duke held 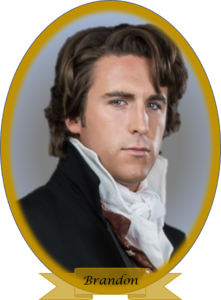 an impromptu dance for his guests. Hasting’s is reported to have been drinking copiously, but leaving the event early. Much attention was given at the event to the necklace worn by Miss Crobbin. The jewelry is a collection of emeralds and turquoises in an antique setting. This piece is well known to belong to the Duke of Cowal as his bride, and the bride of his brother, Countess Beresford, each wore the piece when their engagements were announced as well as several later occasions. Further, a disturbance occurred later in the evening, just before Miss Crobbin discovered Hasting’s body. Our reporter has not yet discovered the nature of the disturbance, or why Miss Crobbin might have been with Hastings alone just prior to his death.

Dear readers, given all of these odd incidents, one can only wonder what might truly have caused Mr. Hastings’ untimely passing. You can be certain that The Teatime Tattler will continue to investigate and keep you apprised of any developments. 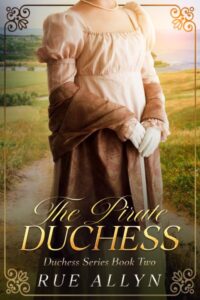 About The Pirate Duchess:  They meet during a brawl!

Esmeralda Crobbin first encounters Brandon Gilroy during a brawl. Once their opponents are vanquished, she admires the man’s skill with his fists, his intelligence, and a number of other attributes until she learns that he is a British Naval Officer. He would be eager to see her hang, if he knew she was the American privateer, Irish Red. Can sworn enemies become lovers? Find out. Get your copy of The Pirate Duchess today. Amazon   Other Retailers

About Rue Allyn:  Author of historical and contemporary romances, Rue Allyn fell in love with happily ever after the day she heard her first story. (She claims she was a precocious little brat who read at the age of two but could hear much earlier than that.) She studied literature for far too many years before discovering that writing stories was much more fun than writing about them. One of her greatest pleasures as an author is being able to read the story before anyone else. Rue is happily married to her sweetheart of many, many years. Insatiably curious, an avid reader and traveler, she loves to hear from readers about their favorite books and real-life adventures. Crazy Cat stories are especially welcome. You may contact her at Rue@RueAllyn.com. She can’t wait to hear from you.

Scandal in the Ballroom?