You will be shocked to hear, dear Readers, that the family of wealthy shipping magnate Mr Franz van Daan has been rocked by the news of his younger son’s scandalous second marriage.  The Tattler has been fortunate to obtain copies of the following correspondence from a source close to the family.

I received your letter yesterday and I admit to being shocked and saddened to hear that you have married again so soon after Rowena’s death.  While I know you were not faithful to her and that you married because she was with child, I believed that you had grown genuinely attached to her and I cannot believe you would dishonour her memory by marrying this widow so quickly.

I am further shocked given the rumours I am hearing about Mrs Carlyon from sources who met her in Portugal during her first marriage.  It is very clear to me that your affair has been going on for some time and has been much talked of, and there are rumours that you were not her first lover.  In fact, I should tell you that her name has been linked with Lord Wellington himself.  I hope you have not allied yourself to a fortune hunter.

There is no point in saying more, since it is done. I would not wish to be estranged so I will receive her, but I hope you will not regret such a hasty decision.  I have informed the children.  Both Grace and Francis are very upset.

I have little time as I have been ordered to Lisbon during winter quarters on a commission for Lord Wellington and I need to set off early tomorrow.

What the devil you think it has to do with you whom I marry and when is a mystery to me.  It is clear you have been listening to gossip from Horse Guards and I thought you knew better.  Since I don’t have time for the full story and it’s none of your damned business anyway, I won’t bother to defend my wife’s reputation although if I hear you’ve been sharing your opinions about her publicly I will forget our relationship and your numerous grey hairs and punch you the next time I see you.  It is true that I’ve known Nan for several years but there was no affair.  She was Rowena’s best friend and is the love of my life.  Receive her or don’t, I couldn’t give a damn but if you can’t be civil it’s the last you’ll see of me.

Eventually you will meet her and I suspect you will revise your opinion very quickly; she is extraordinary and you should be thanking her for taking me on, God knows I’m not that much of a catch.

I need to go.  Give my love to the children and tell them I miss them and that their new stepmother is longing to meet them.  I’ll write properly when I get time.

My love to Josh and Patience, and to you too. I’ve no wish to be at odds with you over this, but you need to remember that I’m past the age of needing your approval.

Yours, in a hurry,

P.S.  I forgot to tell you I’ve been made a colonel and I now command the 110th.  My lass will make a very beautiful colonel’s wife.  I hope you’re proud.

An Unconventional Officer (Book 1 of the Peninsular War Saga) 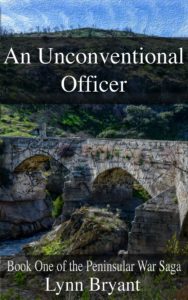 It is 1802, and two new officers arrive at the Leicestershire barracks of the 110th infantry just in time to go to India.  Sergeant Michael O’Reilly and Lieutenant Johnny Wheeler have seen officers come and go and are ready to be unimpressed but they have never come across an officer like Lieutenant Paul van Daan.

Arrogant, ambitious and talented, Paul van Daan is a man who inspires loyalty, admiration and hatred in equal measure.  His unconventional approach to army life is about to change the 110th into a regiment like no other.

The novel follows Paul’s progress through the ranks of the 110th from the bloody field of Assaye into Portugal and Spain as Sir Arthur Wellesley takes command of the Anglo-Portuguese forces against Napoleon.  There are many women in Paul’s life but only two who touch his heart.

Anne Carlyon, the wife of a fellow officer who changes everything Paul has ever believed about women.

As Europe explodes into war, an unforgettable love story unfolds which changes the lives of everyone it touches.

Lynn Bryant was born and raised in London’s East End. She studied History at University and had dreams of being a writer from a young age. Since this was clearly not something a working class girl made good could aspire to, she had a variety of careers including a librarian, NHS administrator, relationship counsellor and manager of an art gallery before realising that most of these were just as unlikely as being a writer and took the step of publishing her first book.

She now lives in the Isle of Man and is married to a man who understands technology, which saves her a job, and has two teenage children and two Labradors. History is still a passion, with a particular enthusiasm for the Napoleonic era and the sixteenth century. When not writing she reads anything that’s put in front of her and makes periodic and unsuccessful attempts to keep a tidy house.

Lynn has eight books published on Amazon kindle, five of which are also available in paperback.  They include the first four books of the Peninsular War Saga; two books in the Light Division Romances, a series of Regency romances following some of the officers of the Light Division into peacetime; a Victorian romance set in London’s East End and a Marcher Lord which is set on the turbulent Anglo-Scottish border during the sixteenth century.