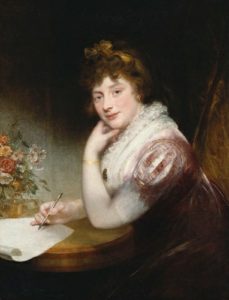 Extract from the diary of Lady Caroline Chantry, sister to Giles, Marquess of Huntercombe. November 1803

What a dreadful day! I write in absolute outrage. I have had no time to write the past two days, but after dear Letty and I had gone to so much trouble to furnish Giles with a list of perfectly eligible brides, our fool of a brother has married, actually married that dreadful creature who called herself Lady Emma Lacy. Well, it appears poor Lord Peter Lacy did make an honest woman of her, but no one can possibly have forgotten that she jilted Sir Augustus Bolt at the very steps of the altar eleven years ago, having refused to say her vows and walked out of the church. And she was seen not moments later embracing Lord Peter on the very steps of St George’s and leaving with him! One would hope the son of a duke would have known better than to become entangled with such a mi. Of course her family cast her off and poor Lord Peter had to drop out of society completely. No doubt he regretted making such a fool of himself before he died!

But unfortunately he did die, and this is the woman my poor brother has been hoodwinked into marrying. Worse, he has made an enemy of the wretched woman’s erstwhile father-in-law, the Duke of Keswick, by refusing to cede guardianship of the duke’s grandson and heir. We are given to understand that Emma had previously refused to hand the child over at Keswick’s very reasonable request and she had the gall to apply to my poor brother for help. She seems to believe that she has some right as a mother to be responsible for her own child. Fancy! A mere woman setting herself up above a duke! I think it very likely that she has been reading treasonous rubbish such as that dreadful Wollstonecraft woman’s A Vindication of the Rights of Woman, and so I shall warn Giles at the first opportunity! 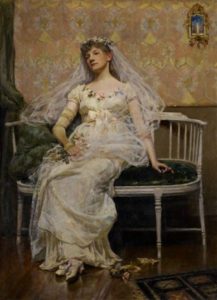 My poor, dear sister, Letty, and I attended the wedding at Huntercombe House only this morning. How I shall ever hold up my head again, I cannot say. But Giles has informed us that if we do not wish for a public breach we must recognise his bride and really, what choice do we have? But such a wedding! The bride’s father and mother were there, but did the poor Earl of Dersingham give his daughter away? He did not! Instead the bride’s children did so, if you please! I wonder the marriage can be considered legal with such a flagrant disregard for all decency. And all Giles would say when I mentioned it, and very tactfully! was that since Dersingham had apparently not shown up for Emma’s first wedding they had thought it wiser not to rely on him this time!

As if that were not scandal enough, the Duke of Keswick appeared at the last moment with his son, Lord Martin Lacy and a magistrate. I thought for a moment that they meant to forbid the marriage, but sadly it was not to be. Giles remembered his manners for long enough to bid them welcome and they sat down at the back. I believe Giles had some discussion with his grace afterwards, but apparently he has insisted on retaining guardianship of the two children. Really, it would be much more the thing if the boy and his sister were raised by their father’s family. Especially since the boy is now Keswick’s heir. It is none of Giles’s business after all. And as for the girl I consider her to be a pert little minx, and all the better for a sharp set-down and some discipline! But what can you expect when her mother defies all authority and sets up to know better than her own father and father-in-law.

I can only pray that my poor brother does not come quickly to realise his mistake, but I fear he is in for a sad disappointment and that we can expect nothing but sorrow and scandal from this appalling mesalliance. 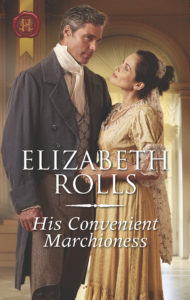 About the Book: His Convenient Marchioness

After the loss of his wife and children, the Marquess of Huntercombe closed his heart to love. But now that he must marry to secure an heir, he’s determined that the beautiful, impoverished widow Lady Emma Lacy should be his…

Emma has vowed never to marry for money so must refuse him. But when her children’s grandfather sets to steal them away from her, she has no other option: she must become the marquess’s convenient bride! 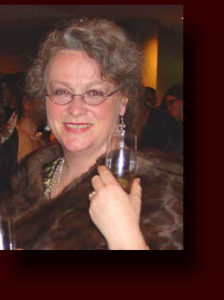 Elizabeth Rolls lives in the Adelaide Hills of South Australia in a valley of apple, pear and cherry orchards. She considers tea bags the work of the devil, and has what many consider far too many books along with three dogs and two cats. She enjoys cooking, reading, walking the dogs and sampling the offerings of local wine makers.