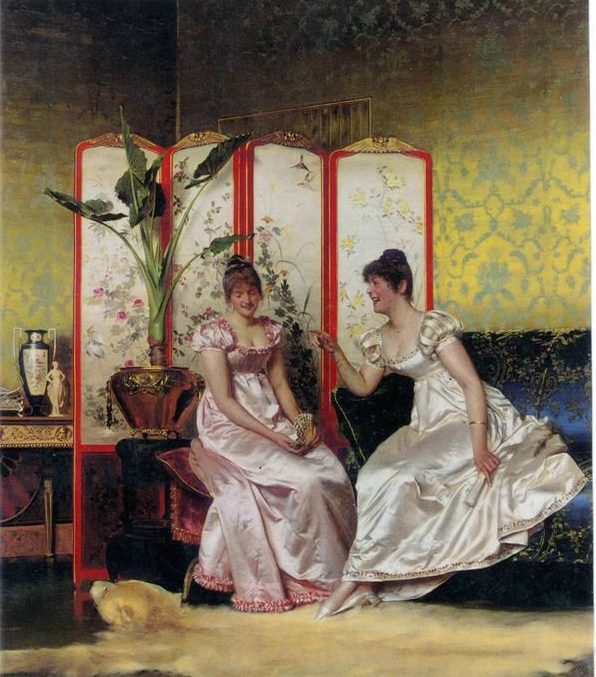 You pour, dear; my hands are far too aquiver with the latest news. I would spill tea all over that lovely dress. What color would you say it is? Parma? Yes, very fetching.

Oh, but I haven’t the time to talk clothing. Except, did you see what Miss J— wore to… No, no, I’ve more important news to impart. We can talk about her later.

Now, you knew that Viscount Burbridge was engaged to Miss Archambault. Yes, the older daughter with the funny name, not the pretty little blonde one. It was quite sudden, you know, and we all thought there might be some reason for the rush, though as it turns out there’s no rush at all because the engagement has been broken! Yes! And while there’s been quite the hush about it, I have the inside story. Oh, is that seedcake? Just one, if you don’t mind. I must consider my figure. Gowns these days are not forgiving.

Where was I? Oh! Viscount Burbridge. The girl is unexceptional, but unexceptionable, so no worries there. But you know Burbridge’s younger brother, the Honorable G—? Well, it seems he’s the reason for scotching the engagement. Oh yes! What? No, no, nothing like… Wouldn’t that be something? But no, why go for the younger brother when you’ve got the son of an earl in the palm of your hand? The girl isn’t stupid. Odd, certainly, but there’s one of those every Season.

No, you see, the Honorable G— has been caught with his hands where they shouldn’t be! Indeed! They were setting him up as a match for Lady H.T. You know who I mean. And what does he do? Goes after her little sister instead! Lady E. And she encouraged it! Can you imagine? Not even out yet, that one, though I suppose close enough to. Even still, can’t condone it. Proves you can be a Lady and still not be a lady, if you understand my meaning.

Well, of course, the scandal. There’s no wonder Lord Averland put a stop to his daughter’s wedding plans. To connect to such a family, earldom or no. What a shame. Darley has always been a good name. I’m sure it will be again, but they’ll need to bury themselves in the country for a while.

Hm? Miss Archambault? Oh, I don’t know. I heard a neighbor offered for her. She could do worse, I suppose. She’s handsome enough, certainly, but all she ever wants to do is ride horses all day. I don’t know what kind of husband she’d be fit for, or what Viscount Burbridge possibly thought he was doing. Might be he’s had a lucky escape.

Yes, dear, just a little more, and some sugar, too, if you would.

Oh, but here’s another thing that’s happened. You’ve heard of Mr. Duncan Oliver? No? Well, he’s a nobody, really. I mean, a very nice young man, lost his parents fairly young. His servants practically raised him. Such an odd situation all around. But he’s disappeared. Yes! His friend George Fitzbert—of course you know George, everyone does—has been haring around asking questions, and even Oliver’s valet has been out looking. What’s stranger, the last people to visit Oliver were the Milne brothers. You know the Milnes. Well, no, not know them, but know of them. Quite the stir when they came to town. Last Milne to come to London was their father when he needed a wife, and no one’s been to Faebourne in I don’t know how long. The brothers weren’t here a week, and now they’ve gone and so has Mr. Duncan Oliver. No word of any kind. What do you make of that?

Thank you for the tea. I must go. That dress really is quite lovely. The color suits you, unlike that jonquil confection Miss J— was wearing. Looked like a walking dollop of lemon cream. Oh, but I haven’t the time to parse it. We’ll talk again soon. There’s always something exciting going on. I do so love London! 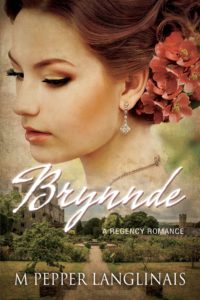 Brynnde Archambault’s father has given her an ultimatum: find a suitor during the London season or accept dull Mr. Dallweather’s offer. Brynnde believes she has found the answer to her problem in the form of the handsome and witty Viscount Burbridge, but then scandal strikes and scotches her plans.

Meanwhile, Brynnde has no trouble finding matches for her friends and even her own brother. But can she find love herself, or is she destined for spinsterhood?

Lady M is a bluestocking of the worst kind but still a valued member of tea parties because she spins the best of tales. Read the full story of Brynnde now and look for Faebourne in the near future. http://pepperwords.com