It has come to the attention of this author that the Viscount and Viscountess Grange are delivered of their first child, a baby girl by the name of Violet. Felicitations to the delightful parents. The Viscount Grange is well known for his mathematical acumen and his siblings are dabblers in the natural sciences as well. We wonder if his new daughter will follow in the family’s footsteps. 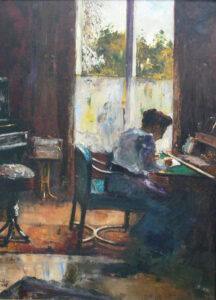 A certain Lady M. has suffered an attack of nerves following a visit to the Grange estate for an afternoon of croquet and refreshments. This Author has been informed that the Grange daughters have indeed inherited their family’s interest in the natural sciences. The young Granges are so enamored that they have taken to performing their scientific experiments to aid in their sporting endeavors as poor Lady M. found out. It seems the eldest daughter, Miss Grange, filled a croquet ball with a volatile powder designed to explode when one of her younger sisters hit it with a mallet. Lady M. reports that the resulting noise and chaos was far too much excitement for a gently bred woman to bear. Seeing as Miss Grange is ten years old, the author can only reflect with increased concern about the well-being of distinguished guests to Lincolnshire.

News out of Lincolnshire has reached our ears. It appears that after a series of explosions, floods, and strange smelling fogs that have rattled the environs of the Grange estate for the past two years, the oldest of the Grange sisters, Miss Grange, will be attending The Yorkshire Academy for Exceptional Young Women, a scientifically-minded school for young women on the Yorkshire coast. We wish Miss Grange the best of luck in her new adventures and sympathize with the neighbors that the Misses Peony, Lilly, and Pansy Grange have also inherited the family interest in science. No doubt they will provide this author with plenty of news in the years to come! 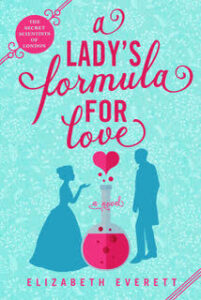 A Lady’s Formula for Love

What is a Victorian lady’s formula for love? Mix one brilliant noblewoman and her enigmatic protection officer. Add in a measure of danger and attraction. Heat over the warmth of humor and friendship, and the result is more than simple chemistry–it’s elemental.

Lady Violet Greycliff is keeping secrets. First, she founded a clandestine sanctuary for England’s most brilliant female scientists. Second, she is using her genius on a confidential mission for the Crown. But the biggest secret of all? Her feelings for protection officer Arthur Kneland.

Solitary and reserved, Arthur learned the hard way to put duty first. But the more time he spends in the company of Violet and the eccentric club members, the more his best intentions go up in flames. Literally.

When a shadowy threat infiltrates Violet’s laboratories, endangering her life and her work, scientist and bodyguard will find all their theories put to the test–and learn that the most important discoveries are those of the heart.

Explosive chemistry, a heroine who loves her science, and lines that made me laugh out loud–this witty debut delivered, and I’d like the next installment now, please.--Evie Dunmore, USA Today bestselling author of Bringing Down the Duke

A witty, dazzling debut with a science-minded heroine and her broody bodyguard. Fiercely feminist and intensely romantic, A Lady’s Formula for Love is a fresh take on historical romance that’s guaranteed to delight readers.–Joanna Shupe, author of The Devil of Downtown 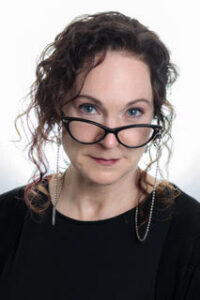 Elizabeth Everett lives in Upstate New York with her family. She likes going for long walks or (very) short runs to nearby sites that figure prominently in the history of civil rights and women’s suffrage. A Lady’s Formula for Love is her first novel, inspired by her admiration for rule breakers and belief in the power of love to change the world.

Excerpt From A Lady’s Formula for Love

After Violet’s nightly ritual of brandy and a bath followed by a journey to her empty bed, she concluded her routine with one final step. She would imagine someone climbing into the bed from the opposite side, blowing out the candle, and taking her into their arms before falling asleep.

These nighttime visitors remained firmly in her head. Violet’s late husband had insisted that a woman with a physical appetite was both unladylike and distasteful. Although she suspected this might not always be the case, she’d never searched out a real-life lover to prove him wrong. Her reputation was too important to the future of Athena’s Retreat.

Worse, what if he was right?

In all those lonely nights, Violet had never conjured a pair of arms that surrounded her like this man’s holding her now. The sensation of a warm, solid body against her stunned her, more than the chaos and the scattered shards of glass and wood. The soles of shoes whipped past her; all around her, voices were raised in angry, frightened cries.

None of this touched her.

Not because the man holding her had rasped those words in her ear, although that was delightful, how his lips had brushed against the sensitive lobe. No. Something else told her everything would be well.

She had seen him before the explosion, standing next to Grey. In the commotion around her, the dark figure at Grey’s side had remained preternaturally still until he exploded into motion.

A typical reaction might have been to step back or shy away from a strange man hurling himself at you. Instead, as he came closer, Violet had the strangest urge to step toward him.

Nothing about his appearance signaled safety. He wore a dull brown frock coat, a few years out-of-date. He was tall, but not too tall. Broad, but no more than an average laborer. His top hat of felted wool was nondescript, as was his dark, curly hair and the whiskers halfway down the sides of his cheeks. Deep lines evidenced exposure to the elements over many years, and he’d broken his nose at some point.

In any other setting, he would have slipped her notice, as though he were a shadow or a slight blur at the edge of her vision.

Except she happened to look into his eyes.

Not even when she’d had no idea why he would have laid hands on her, in the seconds it took between the time he grabbed her until the explosion—not even then—was she frightened.

Cradling her head in one large hand to protect her skull from the fall, he held their bodies flush. When he’d pulled his mouth away from her ear and locked his gaze on hers, Violet had understood. Although they were an unremarkable shade of brown, his eyes were what told Violet she would be safe, no matter what.

His glance swept her face, then traveled the length of her body, before he turned his head to survey the crowd. The lack of expression and preternatural calm belied the intense vigilance in the depths of his gaze.

“Are you all right?” he asked.

Was she all right?